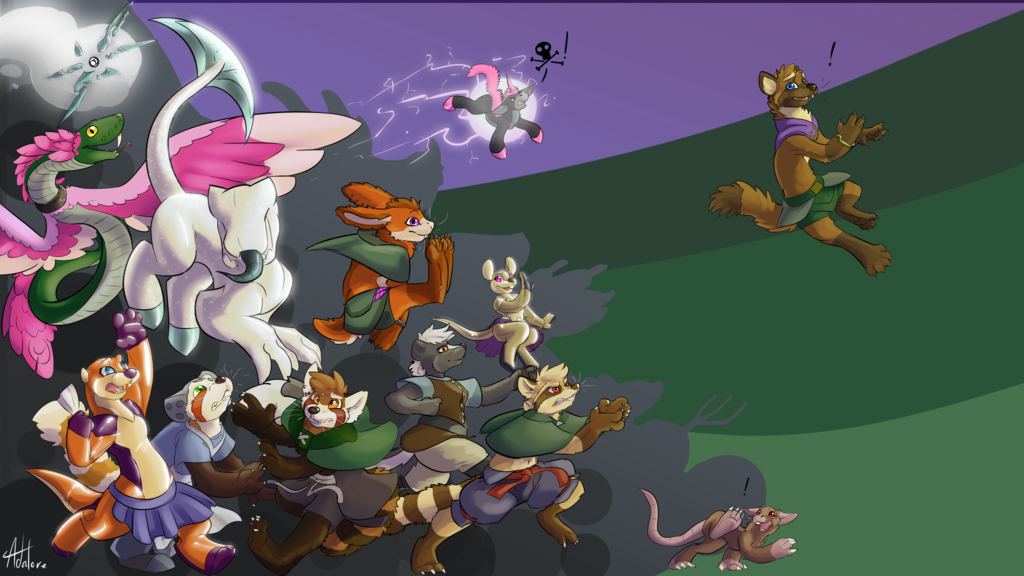 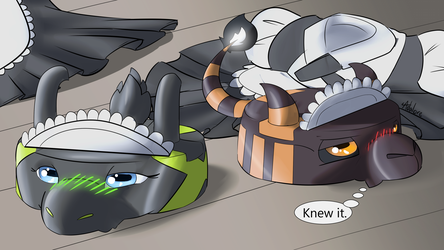 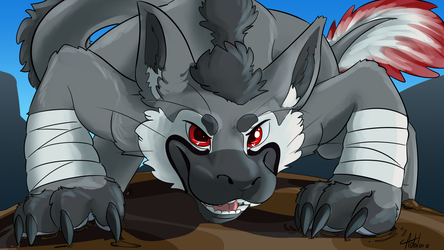 Manatear - The Chase is on

I screm, I started this at the begining of the year and it too many hours of effort but now it is done.

This features a bunch of my characters chasing my main sona character, all these characters belong to my Manatear setting where everyone and everything is saturated by magic and readily mutable by it.

Specific characters are... (Right to left, top to bottom ish)
Hans, The Dook (Pine Marten), he has chronic toonism and stumbles into trouble a bunch. He used to be human.

Pacity, The Muse (Donkey Kiren), Is an all powerful (but not really) entity that siphons energy and can grant boons on theme with their own unique power set. Uses lightning and is neat. Not quite a spellfluxed. Pacity wants Han's head for some reason, I am sure it's earn and not for petty reasons.

Daisy, The squeak (mouse), a professional waitress at the local Airbar, which is vaguely known for their inflatables as frontend employees. Daisy tends to run the weekend events at the bar where more interesting events happening. Daisy is a native spellfluxed, and has been some sort of synthetic for most of her life.

Sydney, The Hop (rabbit), they are a professional rescue agent that pulls spellfluxed out of what most in the TF space call "Bad ends". This is what your local in setting taxes pay for, professionals to save your butt. Native Spellfluxed. Just passing through the angry mob, doesn't even know what is going down.

Snowbeast, I figure they needed representation because people seem to like them. Beastial snow constructs with an organic core (their tongue) that runs through the center of their body to tail tip. isn't restricted by silly things like anatomy and organs, that's what the frostworm is for.

Ice Sprite, a manifestation of pure magic into a theme. Associated as the origin point of the snowbeasts. Professionals in setting are unsure if they are properly aware or reacting to stimulis like jellyfish.

Coatl, They are just happy to be here. :3c

Manatear kobold, Ratmole, One of the things I am trying to do in setting is have my own special kobolds, which are all small hybridized semi feral critters or a bit more dragonic "elites" formed like their dragon master. Kobolds cannot readily vocalize and be understood by other spellfluxed. A quirk of their existance makes them immune to "Feralizing" effects, as they are already very beastial.

Nicole, The Mephit (Skunk), Older of many college major, and thought dead since being lost on the manatear. Ex human, still coping with this magic nonsense. Can control crystal stuff so that's neat.

Chaujen, The Wah (Red panda), A professional wayfinder, seems to have lost their way and they are getting ran over by the mob. Native spellfluxed.

Jared, The Wah (Red Panda), Owner and cook for the airbar, When he found himself lost on the mana tear and turned into a small furry doofus, he was adamant that this wasn't going to stop him from opening a restaurant damn it!

Petunia, The dook (Otter), One of the handful of staff of the airbar, seems to be running a bill or reciept to Hans.