Leave us alone! by Adalbertus 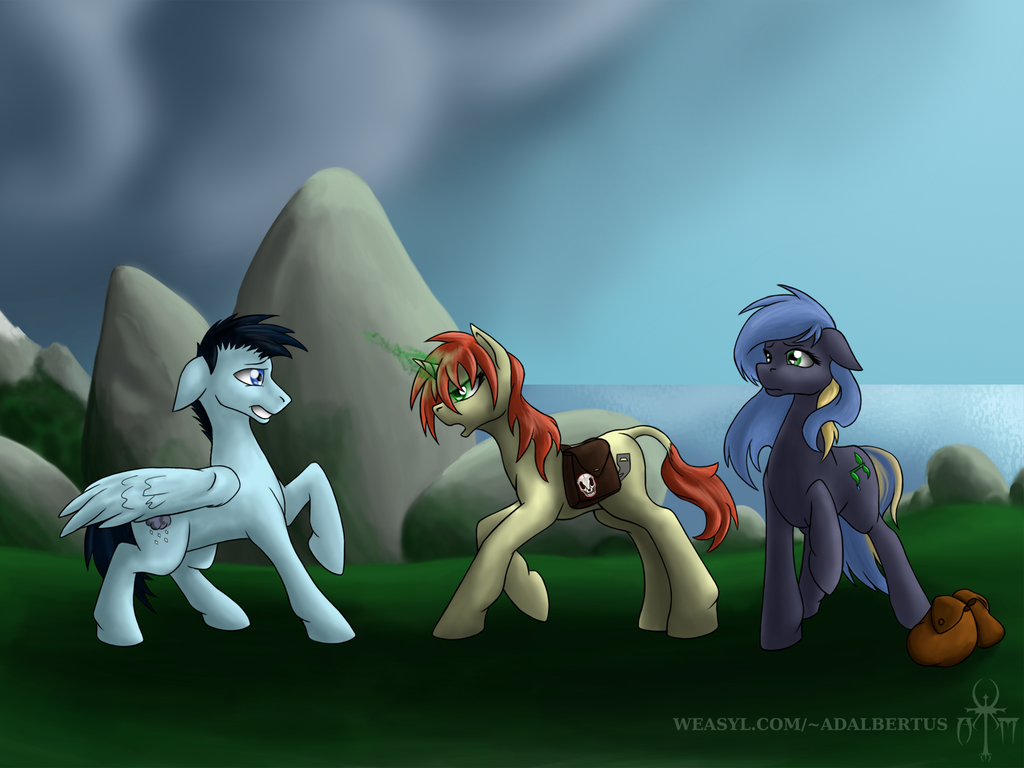 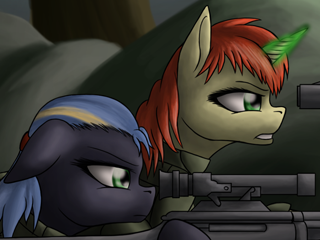 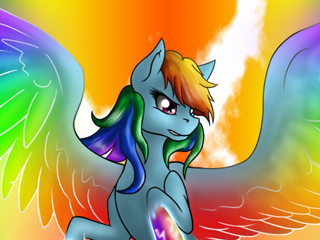 By the time they reached their destination, Amber was exhausted. The heat was unbearable and despite several stops and quite a lot of water she drank already her brain felt like a dried plum. She stopped thinking and just followed Dancer who appeared to be in a much better shape that day.
When they finally stopped, the unicorn just dropped on her belly and groaned. She had to admit that the place was pretty nice. They were on a large flat, grass-covered mountain ledge that cut deep into the mountain itself. It was roughly the shape of a triangle with one side open and exposed to the beautiful view of the forest below and the sea in the distance. The other two sides were made up of rough rocks and a few dark shapes of cave entrances. There were also bushes and trees and even a small waterfall and a pond with shiny clear water.
“A'right fillies!” Jack said after taking few sips from the pond. “We will spend the rest of the day here. Take some rest and gather some food, remember what ah told ya yesterday. You should find plenty of good eatin' here!”
Both pegasi brothers immediately spread their wings and jumped to the air to check out the highest bushes.
It seemed silly to Amber that they even bothered to walk all the way up if they could just fly here. She was about to say something about it when she felt a wave of anger heading her way. She jumped up and turned towards another pegasus who was approaching them.
“You!” Blizzard said angrily pointing at both mares “You ratted us out! You sent the old guy at us!”
“No, we didn't!” Dancer stepped in. “We went straight to our tent.”
Amber could feel his anger boiling up. He wasn't going to believe them, that was for sure.
“Bullshit! I know who you two are! You can lie all you want but I know!” He stepped closer to Amber. “Bucking filly-foolers! I saw the way you looked at other mares!” He turned to Dancer. “You told on us to spoil our fun and...”
Amber couldn't stand the anger and aggression that was building up in him. She pushed him away from Dancer and stood between the two in a well-trained battle stance. Her eyes were blazing with bright green flames and her horn crackled with magical energy as she pointed it at him.
“Step. Away. From. Her!” She said in a low, threatening tone. “Go back to your friends and stop bothering us!”
Blizzard stared at her in shock for a moment, but it was soon replaced with even more anger, but he turned.
“You will regret this!” he said as he walked towards Grass Blade and Spark who rushed to his side.