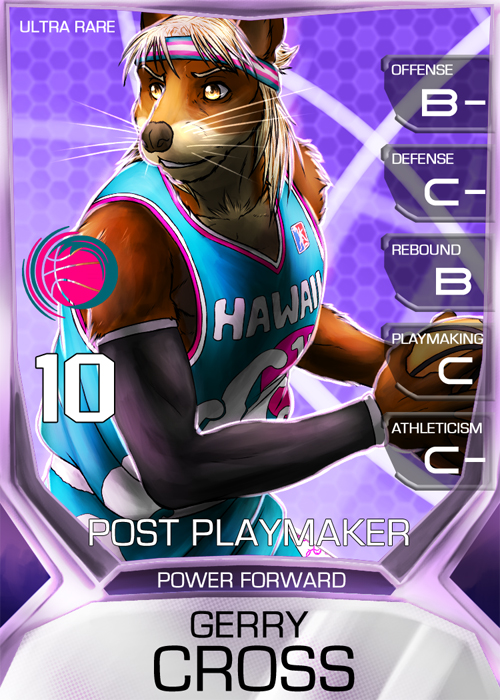 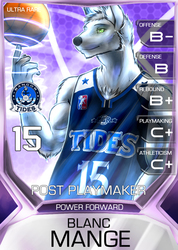 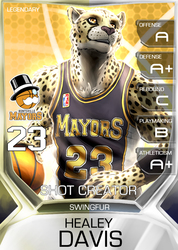 He stands at 6'9" and weighs in the 240 lbs range, has a lean, athletic build, but isn't the most athletic of all the FBA furs out there.

He was picked by the Lorain Firestorm in the 2004 FBA Draft, forming the 'Mink Trio' together with Aisha Melbourne and Erich Haber.

He didn't start out strong, and his first few years in the league were fairly average at best, but his opportunity came in 2007 when the Firestorms decided to go with what may possibly be the tallest front court setup in the league, where the Mink Trio of the Firestorms is formed and where Gerry got to shine, netting him the 'Most Improved Player' award for the 2007-2008 season.

Today, Gerry is one of the older players in the league at the age of 33, and is the Captain of the Hawaii Kahunas FBA franchise, so he isn't as athletic or as explosive as many of the younger FBA furs out there, but his experience and skills, plus his captaincy aren't just for show.

His fundamental skills are solid and sound, and he's one of the most skilled Post Players in the entire league, trusted by his team mates for his decision making in the low post, and the rebounds (6.3 Rebounds per game) and scoring (11.3 Points per game) he's made for the Kahunas in the low post is testament to that, despite his age, and lack of height, size and power compared to many of those who share his position (those who play the PF position are getting bigger year by year).

Right now however, I wonder how much time Gerry has left in the league. As his adopter, I certainly wish he can play for much longer, but if the average age to retire is 35, then he hasn't much time left, but I confide in the fact that the oldest player in the league ATM is 38 :)