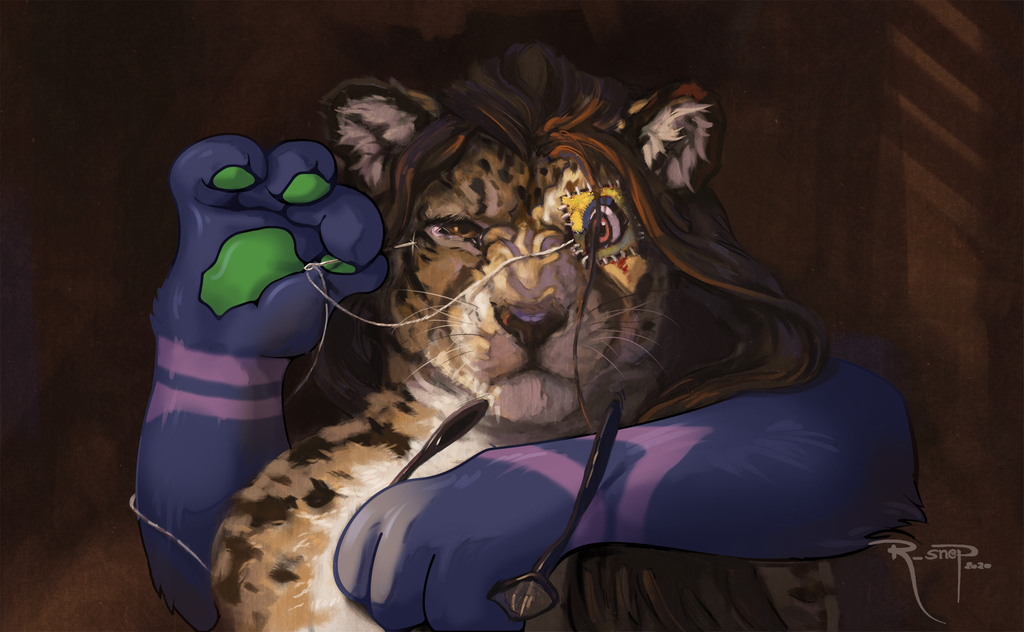 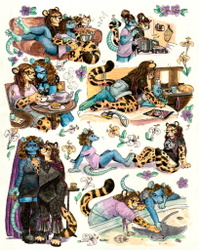 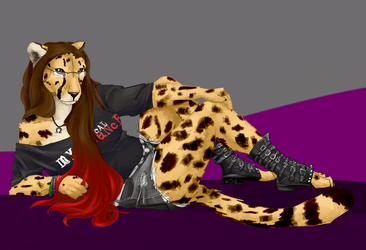 [Edit: I'm hearing word that this piece may have been shared on some sort of furry article aggregation site? If you're looking to do that, please contact me first. Aside from my personal website, this has only been shared here on Weasyl and Twitter, and it's staggeringly simple to send somebody a private message on both platforms. I do not consent to my works being copied or rehosted onto any other website without being asked.]

I've spent 6+ years as a fursuiter in this fandom and need to get some things off my chest. Visual art is what draws people's attention in this community, but the sentiment behind the image is just as important. I appreciate your patience and attention as you take in what I have to say.

I have an, at this time, unique hyper-realistic fursuit that incorporates my real eyes and hair into the costume. I love my fursuit and couldn't be happier with it, but obviously, it's something extremely niche, quite the opposite of the cute and cartoony fursuits that attract most members of the fandom. Over the years, I've received a fair bit of unwanted criticism, backhanded compliments, and outright insults about my choice of fursuit style. I have been called ugly, creepy, gross, cringe, horrifying, not a real fursuit(er), and other less savory things that don't bear mentioning. I've had people say I should cut my hair off, wear contact lenses, and even tell me to get fake eyes put into my fursuit, as though I didn't actively choose to purchase a fursuit like this based on my own preferences.

Of all the realistic features of my suit, my eyes are what draw the most attention, for better or worse. Until now I've been telling people that I chose a use-your-own-eyes fursuit because of my vision impairments, to avoid the redundancy of putting fake glasses on a bigger and uglier fursuit head with my prescription ones hidden away beneath. While this is completely true, I haven't spoken before about the more personal reasons for doing so. I was put off getting a fursuit for so long because the vast majority, even realistic ones, don't really feel alive because of their static facial expressions. Shetani is not a theme park mascot or a cartoon and I don't envision her as such; she is a representation of myself as an animal. When I fursuit, I'm not being an individual playing a fictional character, I'm still me - albeit a little fuzzier. I want people I meet to feel like they are talking not to the costume, but the person within, and make that interpersonal connection. It's said that the eyes are the window to the soul, and I love how I have been given so much freedom of expression and emotion by showing my eyes when I fursuit. Some of the most impactful people in my life tell me that my eyes are striking, beautiful, and breathtaking - who wouldn't want to include that in a representation of themselves? My eyes are as integral an element of my fursona's design as her hair or species.

In a fandom supposedly based in acceptance and tolerance of individuality, I'm disappointed by how much close-mindedness I encounter, not from non-furries, but from fellow community members. For years, I was afraid to call myself a furry because I would be shunned and mocked by people outside the fandom - it is a bitter irony that the bulk of the harassment targeting me today comes from other furries. The phrase "Be yourself - no, not like that" is frequently tossed around as a humorous punchline, but as is often the case, its basis in reality makes it all the more poignant. I can't help but get aggravated every time I share a photo or video I worked hard on and get the inevitable remark that I should change things about the way I present myself because Random Internet Stranger #503 would like it better. I fursuit for my own benefit, not the enjoyment of others. I'm not performing for public approval and my mere existence is not an invitation for critique. I feel frustrated that the common response is not to appreciate something unique that they perhaps haven't seen before, and respect or even just acknowledge a person self-expressing in a novel way. Instead they go out of their way to tell me that they're put-off by how I choose to present myself, and that I should remove my individuality, assimilate, and become more like the status quo.

This aspect in particular inspired much of the symbolism of the piece. A garishly colored cartoon furry seeks to strip Shetani of her individuality as it forcibly stitches cutesy cartoon patches over her eyes. Its arm across her chest, with Shetani's broken glasses clenched in its paw, restricts her from moving forward, and she can do little more than accept the abuse defiantly, tears welling in her uncovered eye, brow and muzzle creased in silent outrage. The artist did a fantastic job of pushing the contrast between the two art styles, enhancing the unsettling feeling and really driving home that the two do not belong together. I'd love to hear other folks' interpretation of the piece as well - feel free to comment with your remarks!

Yesterday, an opinion post made the rounds on Twitter, which happened to be a comment on a photo of a suit belonging to one of my friends. The person claimed all realistic fursuits are nightmarish and take away the fun of people trying to be cartoon characters, while using the verbage "realistic and regular fursuits" as though realism is a form of aberrance. Thinking before you speak is absolutely lost on many members of our community these days. The amount of entitlement and outright lack of etiquette from some furries is absolutely astounding. Everyone's allowed to have opinions, but they are not entitled to voice them without being asked. If you wouldn't walk up to a person on the street and tell them their shirt is ugly, this also applies to any other apparel or visual aesthetic they've chosen to express themselves.

Sadly, we live in a culture that promotes reactions and having a comment on everything over actual substance. I'm glad I grew up in the time period that I did, because I doubt I would have survived as a teenager in today's social climate. I'm shocked by the amount of bullying, vitriol, and outright bigotry I see regularly - it's like people don't care there is another human being on the other side of the screen. What's worse is that these individuals never face actual consequences for their actions, and thus, never learn how to properly behave.
Naturally, I have my own opinions on toony fursuits, art styles, and even certain popular fursuit makers. You will never hear me voice them, especially not directly to people who enjoy and support these aesthetics, because it's their decision that makes them happy! Other people's choices have zero bearing on my own enjoyment of the furry community, and in fact, it's our diversity that makes this fandom such a joy to be part of.

Thank you for taking the time to read this, see things from my perspective, and hopefully understand what we need to do to improve as a community.