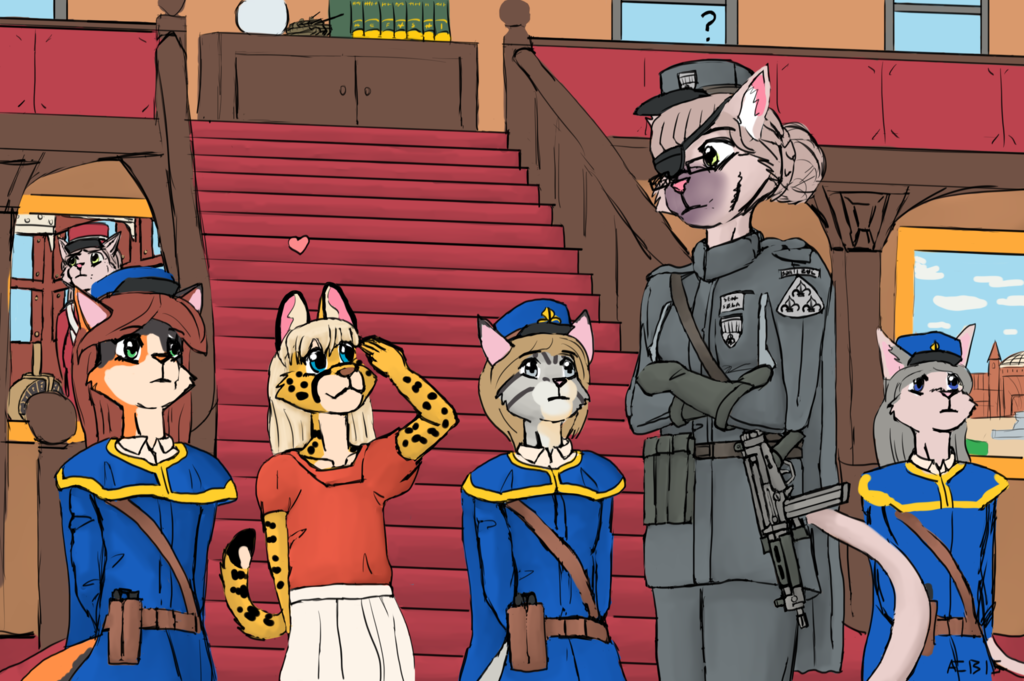 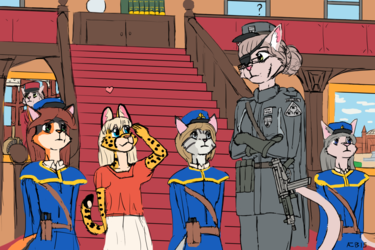 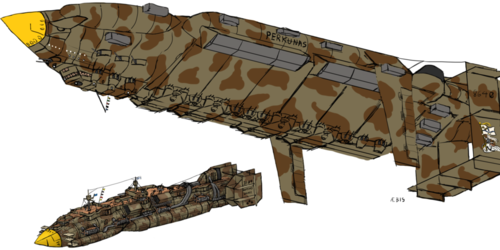 WIP of Ingrid sen Sola arriving home after her unit was deployed in a brief border conflict with Etrusea; as ever, on getting back she had her younger children line up for inspection since they enjoy that. She was somewhat surprised to find she had a extra one, a little Etrusean serval who didn't speak a word of Aludran.

Her mother was in Aludra on holiday when war broke out and one of Ingrid's wives married her so she wouldn't be extradited to Etrusea since they had sort of fallen in love. Ingrid sometimes wonders if her wives focus too much on the "amorous" part of polyamorous, but she really wouldn't have them any other way.

The precise manner of her arrival is why she still has her weapon, a blowback SMG derivative of the standard Aludran battle rifle that was replaced by the Type 70 shortly afterwards. Her heavy tank unit had been redeployed at Sarren Valley in anticipation of an Etrusean force that believed it was only facing a lightly-equipped border guard unit, using the partially-completed Transport Air Destroyer Valiant: to prevent the Etruseans getting a good look at it the Valiant had left immediately once the tanks were on the ground.

Two Etrusean Fencer ground-attack aircraft with cluster bombs were not accounted for following the engagement, and Ingrid ordered the heavy tanks under her command to split up, each taking one IFV as an escort to drive ahead so they didn't swing their main gun into anything while going around a corner, and simply drive back home. She reasoned it would prevent civilian casualties by not presenting a target large enough to justify attacking them in traffic, and also be good for morale if they were seen driving back. Currently her Black Swan is parked up in the driveway waiting for a tank transporter to come out and retrieve it.

(It later turned out one of the two Fencers had crashed in a farmer's field and the other landed at a civilian airport in Etrusea, which was why Aludran spyplanes failed to locate them)

The painting in the background is Ingrid's great-grandmother Fiona standing on the bridge of the Queen's Lance. It's now her great-grandmother because I did some math >.> There's also a model of Ingrid's tank up on the desk, it's a paperweight the army gave her for thirty years of service and replace when she gets a new one.

Sola is a minor noble family known for manufacturing sewing machines; while Ingrid is the nominal head of the household, her little sister Nicole is the one who actually runs things since Ingrid has never really been interested in business matters. The younger children respect her but know they can still talk to her if it's something important; they're currently wondering if they should ask her if their new sister is The Enemy since she doesn't seem to be always listening and is sometimes asleep.

Ingrid calls the serval Sunny. She neither knows nor cares what her real name is.