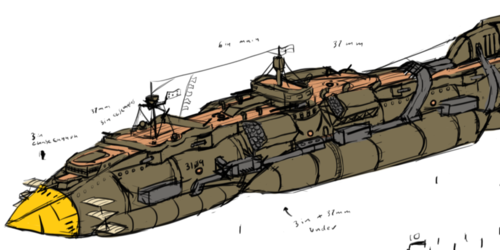 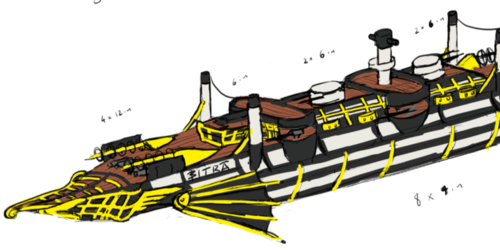 "And do not let them remind you of the days when you were beautiful....you are always beautiful unless you stop believing it! That is what it means to be a Lady!"

Obsolete from the moment her first plate was laid down, Queen's Lance was rebuilt following the Battle of Laurent Abyss, her decorative wooden outer hull and graceful clipper bow and cruiser stern torn off along with her masts and spars. In their place were mounted diesel piston engines and casemate guns, along with four large clusters of tubes for unguided high-explosive rockets.

She shows the Aludran tendency to point the funnel for the Levistone boilers to the rear of the ship so as not to choke the rear engines during steep climbs or downdrafts, and features a typical Aludran layout of two central lifting heaters with two smaller ones at each end for pitch control. The construction of Aludran Leviships is far easier than the old method where the stones had to be "laid down" first and then the whole vessel built around them while tethered to the ground: since the boiler cores are slim cylinders which can be inserted into the completed vessel, the boiler assemblies are laid first and then the mechanical keel and its spars built on top of them.

Her Captain during the Reformation War was Fiona sen Sola, Ingrid's great-grandmother. At 68, she was a highly experienced officer and had worked her way up the ranks from a gunner on a Leviship with broadside cannons (a job that left her with a hook for a right hand) to her present position. A commoner, she met her wife Nicole sen Sola at a ceremony and married into the family, though she was always proud to say her progression in the Air Navy was entirely on her own merits.

Experienced in the energy flight maneuvers required by older sail-ships, she realised the Nitra was only turning using her rudders and directed her crew to use every method of turning an Air Destroyer to bring the remaining rockets to bear. (Which is a comic panel sequence this is a sketch for)

Visible armament is two 6 inch main guns, a shorter 6 inch chase gun mounted under the bridge, 4 3 inch casemate guns with four more on the other side, and six 37mm anti-aircraft machine guns. She carries more 3 inch and 37mm guns in her belly turrets, and two 3 inch and one 6 inch her tail turrets. As well as these, she has mounts for 8.1mm medium machine guns, though these are stored when they are not in use.