Ice and Iron (WIP 3) by ACBradley 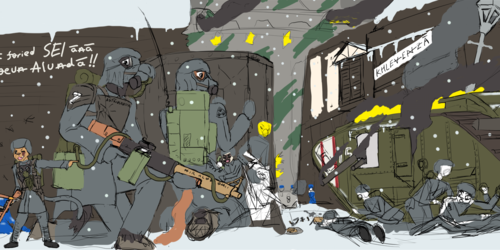 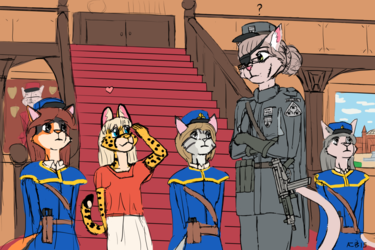 "Janek Fortress will NEVER be captured
go back home to Aludra!!"

Much improved-er version, also now has two men in it (the brown horse, who's the fraternal twin of the support gunner in front, and the raccoon helping the medic to the right) and you can now see why I keep rating it mature D: Better description to follow, for now I'll just say it's what happened after this.

The vixen on the left with the Dreyse needle gun is going to have intentionally bad trigger discipline: she's a civilian partisan (hence the fleur-de-lis just painted on her jacket), the Aludrans tended to just hand them a gas mask, show them how to put it on and have them fight with whatever weapons they owned, including family heirlooms like hers. Aludran history books insist on referring to these fighters as "loyalists" because the word in Aludran is inseparable from loyalty to the Empress.

The reasons for civilians fighting were complicated: a lot of the "loyalists" were people who considered themselves expatriate Aludrans rather than Linthan citizens; there was also a fair contingent of criminal gangs who stayed behind to try to loot the place when the civilian population was evacuated and citizen militias that stayed to stop them when the police were ordered to enlist, neither of whom were issued gas masks; both groups were understandably angry about phosgene gas deployments inside the city walls (Janek's double city wall had fallen, the one in front of them is the double-wall of the fortress itself, which actually does have gun turrets that can fire into the city), and a lot of them joined the Aludran cause.

The vixen is a little different, a bank teller from the South of the city who had seen the pillar of fire when the magazine of one of the satellite forts, Nais, exploded; at the time it was one of the largest explosions in history, damaging rangefinding equipment and smashing windows on Citadel Janek six miles away and heard clearly in the capital Gollande. She wanted the war to be over because she was certain the city she loved would be completely destroyed otherwise, and so decided to join the Aludran forces to try to bring a quick end to things. She's a little out of shape, frightened, and wishes people would stop shouting at her in a language she doesn't understand, but she's got her heart in the right place.

There were quite a few like her, since Janek was never particularly fond of the national government in Gollande and many thought Rhiel was going to get them all killed rather than accept she'd lost. It largely depended on whether they believed Aludran propaganda broadcasts by radio and speakers that they would not be harmed if Janek fell.