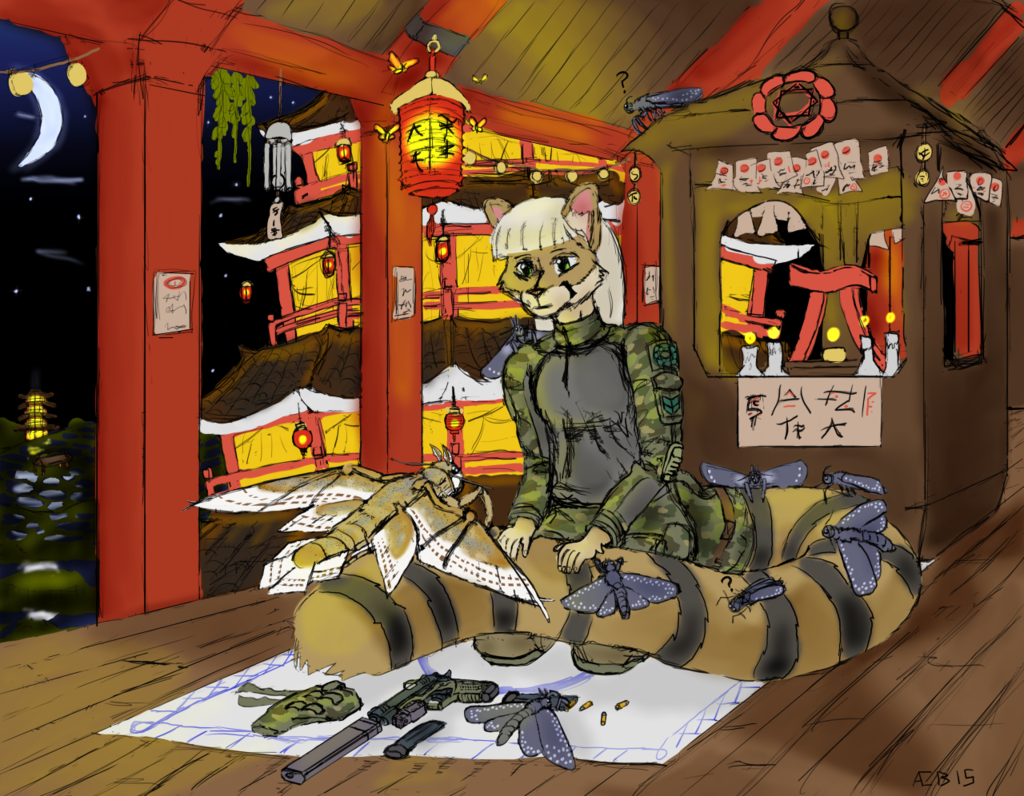 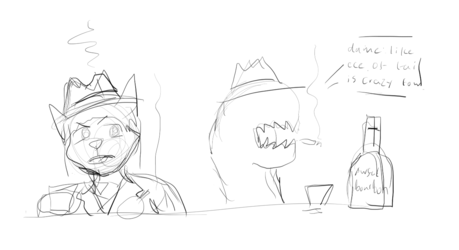 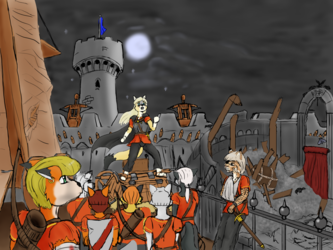 This is a companion to the image of Lorii with her sisters, showing Jiang having gone to her family's shrine to ask the ancestors to watch over her and bless her sidearm. Her farm's moths, however, sensed she was worried and came to cheer her up, which, since they are rather stupid little creatures, they believe can be achieved best by sitting on her. Her friend Cheng isn't sure where she's going and doesn't want her to leave.

Jiang's worry contrasts with Lorii to match how their countries feel; the Aludrans have had one victory after another, while the Chirans are realising they've made mistakes, huge mistakes, in how they've fought this war, and that they might actually lose it.

The shrine is a Shira, a small replica of the 90-foot Shirai gates, eight of which stand in the outer Chiran provinces. These gates are believed to be the places where souls pass between the spirit world and the mortal world; the smaller Shira gates allow the living to speak to the dead.

The little tickets are prayer slips, they were traditionally given to travelling priestesses to read at the Shirai gates since it wasn't practical for every Chiran to go to one of the eight temples when she wanted to speak directly to her ancestors. Here in the Southeast they believe you can speak directly to your ancestors rather than just random spirits with a Shira gate, so small children give them to their older siblings because they are not big enough to climb up to the shrine yet.

The same slips are used in the North as blessings; since most of Chira's submarine bases are in the North they are strung up around reactor rooms because small Northern girls have collectively decided that is where the submarine's soul is.

This is also where the Mirrai picked them up from, which is why there are little blessing slips in the picture of the Mirrai mom reading to her egg.

(The random spirits thing is a fallback if you are sure your Shira said something and it turned out not to be true; that is said to be a Wanderer, a spirit of someone who requires forgiveness before they can go to the next world, and sometimes they resent this and play tricks on the living)

Meanwhile, one of the moths has completely forgotten why she came here but has discovered a magical metal thing that makes shiny things pop out if she presses it right.