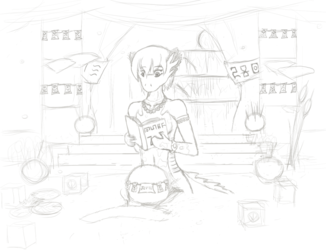 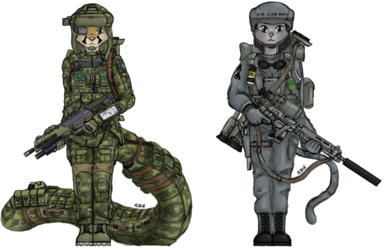 Chiran Cruiser Submarine Minyan-4* under escort by Aludran Keri-class destroyers following the sinking of the chartered liner K-41, formerly named Mirage. Camo sheets are set up on the Minyan-4's deck to act as a temporary shelter.

The colossal ship**, some 850 feet in length, was the first combat vessel to use nuclear power, and in addition to carrying enough firepower to sink a fleet, also acted as a mobile charging station for the two diesel-electric attack submarines Sei-Lin and Sei-Shan. The giant size of Cruiser Submarines was largely a necessity created by the Treaty of Lyle, under which Chira had agreed not to construct permanent port facilities on the Karwen Islands; all Cruiser Submarines carried enough support equipment to turn a bay into a makeshift dockyard, including collapsible crane derricks and entire vehicles in a large rear transport bay.

K-41 had been carrying some 2,500 family members of Aludran Navy sailors back from visiting the major naval base on the island of Alumar, when she was mistaken for a new class of troopship and hit with a single Type 4 36-inch torpedo. Seeking to immobilise the ship for a better identification, the Type 4 used was fitted only with an inert concrete warhead; the explosion of the torpedo's engine, however, was sufficient to tear open the hull of the unarmoured liner.

Following the attack, the passengers on K-41 were treated to the awe-inspiring sight of Minyan-4 conducting an emergency surface, the captain ordering survivors to be bought on board; her prompt action saved the lives of all aboard K-41. Realising the Aludran Navy would most likely kill her crew and capture the submarine if the civilians were handed over at sea, she insisted on handing them over in the Aludran capital: "What you do to us, you will do in front of the world."

A fierce storm later forced the giant vessel to dive, the civilians being bought below decks; for many, it was their first meeting with the enemy.

The sight of the "beautiful nightmare" surfacing in Alurna was one of the first hints of a hope for peace between the two nations; more so the sight of no less than the Empress of Aludra refusing to allow Minyan-4's captain to bow to her on the dockside and instead offering the red panda a salute. Never again would Aludran propaganda suggest that submarines were evil.