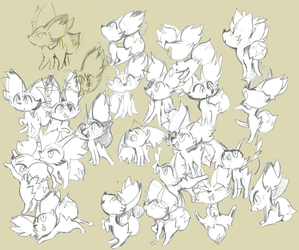 my bf bwrd's flygon OC! he came up with all the basic concepts, I just helped workshop by doodling it myself and suggesting things here and there! He is named for the large green melons from the game.
Bird's own words about Hondew:

"As a trapinch (and vibrava) he was a very simple minded creature, highly food motivated. would overeat if he could. but he was just getting by in the desert and could only do so much. Surviving to his final evolution was good fortune. The resulting intelligence and stats boost... are used all towards his high food drive. but now he also has the ability to enjoy playing with his food, and devise ways to hurt things.

his moveset is focused on paralysis (mean look, thunder fang) to slow things down and avoid giving chase(or being chased). he's not a fast flier, nor can he fly very high. as he gets fatter and less mobile, it means he problem solves how to work around these things. enabling him further..

he delights in eating baby pokemon and eggs, there's a sick enjoyment in doing so. and he clears the area of unwanted competition by making an inhospitable environment where there's a dirty rotten baby eater on the loose ! :(

He'll never pick a fight directly with a pokemon as high leveled as him. he has patience and tenacity on his side. he will play the long con of harassing you, tormenting you, and evading you with a tricky moveset. and most pokemon just would rather live elsewhere, where the competition is more manageable and there isn't a huge jerk nipping at your heels every second.

he likes to manipulate things in his hands, and the frequent use makes them more dextrous than most flygons. he can often be seen holding something. meticulously running his claws over it. in the case of avvy's shinx, he loves to touch her fur and carries her around everywhere. she's very novel, as shinx are not native to his deserts. he keeps her on a whim, but grows very attached to her over time"

Hondew is also genetically a chimera, and his markings are 'mosaic'. I wanted his dark markings to take visually after pokemon like 'shadow lugia', and in the pokemon world I like to think melanistic individuals are termed 'shadow' due to the association, and as a result are also sortof mythologized. He certainly aids that reputation with his demeanor.
I think it is safe to say he's killed humans in addition to preying on pokemon!