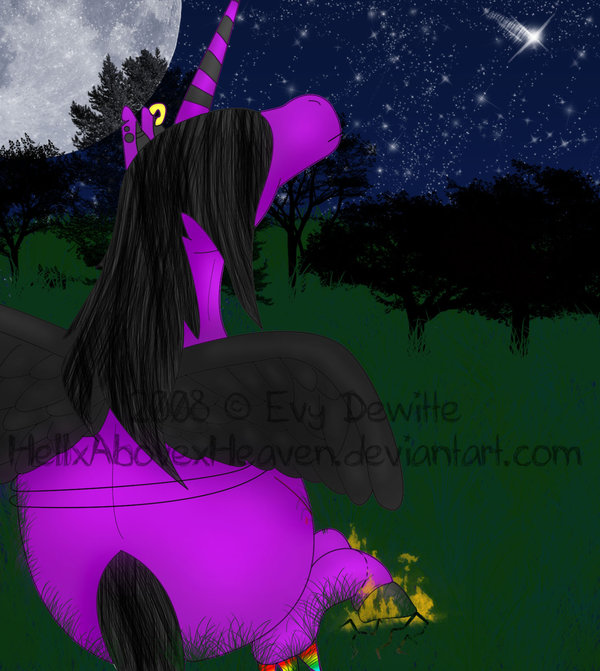 5 years ago, Zitox was part of a wealthy and happy family. He had a girlfriend and had nothing to complain about.

Zitox his eyes are never shown, so no eye color! He has long black "hair" and purple fur. he's a mix of a unicorn and pegasus, so a pegacorn. In his right ear he has 1 piercing throught his earsides (an industrial piercing) and in his other ear he has got a golden earring :]

Then he has a shiny horn (purple/black), an anarchy tattoo on his right leg and a wound under it.

On his backpaws he has got 3 sharp rainbow spikes, don't forget those.

On his left front paw he wears 3 colored bracelets and on his other paw he wear a bandage.

His body fram is slim.

Every step he takes is with flames and cracks under his hooves.

STORY: This all changed when Zitox found out by the devil himself that his parents sold their souls and his to the devil. The devil can’t kill people, he can only make them kill there selves. The devil took everything away from them, his parents were constantly fighting about their problems they had now that they lost their money and committed suicide after everything completely went wrong.

Zitox was placed in a foster home where every other orphan made fun of him, making him feel miserable.

After a while Zitox was released from the foster home and found out his girlfriend had someone else.

Zitox was devastated and was on the verge of self-destruction but he found a way to turn his sadness into bitterness and his despair into hate.

Knowing that the devil was waiting for him to take his own life, he made a deal with the devil. Zitox traded his soul for two other souls, his ex-girlfriend and her lover.

Zitox ripped out the heart of the one he once loved and keeps it forever by his side to show everyone what would happen if they fuck with him.

The devil wanted more out of the deal and made Zitox one of his henchmen. Zitox was now among others responsible for killing all that was good in the world, he is now an instrument of evil, one of Satan’s evil henchmen.