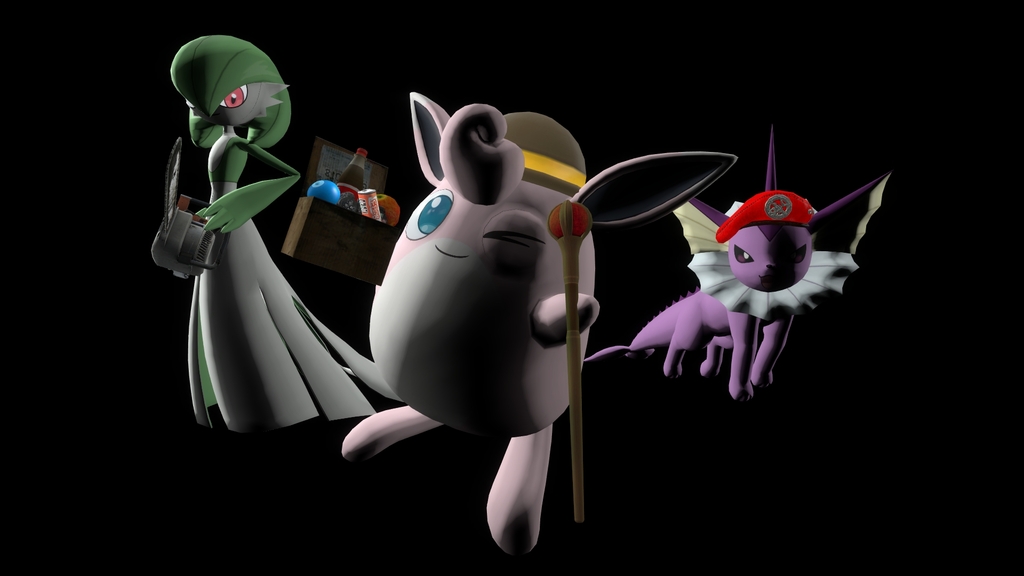 Hubble the Wigglytuff, Alnair the Shiny Vaporeon, and Gaia the Gardevoir are cosmic horrors disguised as Pokemon and worked as business entrepreneurs hailing from the Pokemon branch of Omega Mart.

They first made their Pokemon Omega Mart in Unova. However their ownership was moved with human entrepreneurs instead in their Unova Omega Mart and they built their own Pokemon Omega Mart at the PMD Multiverse were it teleports into various worlds every weekend. Their workers are actually clones of random humans and Pokemon duplicated by their [REDACTED].

Overview of the characters:

Despite they are not Pokemon and are basically Lovecraftian horrors, they are extremely friendly (besides Alnair who is very reckless). Showing hospitality to their customers, even persuading mons to perceive of the weirdest things as normal, such as the function of a Dark Matter spray that summons a wormhole upon activation and calling it a certified cleaning tool and the literal eyeball anatomy of Omega Mart Apple in which they have concern with the mental health of the customer because of the mistake of seeing them as normal apples.

When they speak, they talk in a rather computerized manner while trying to maintain a very normal speech

Hubble is hyperactive and outgoing. His mind is filled of what can Gaia describe as a "Cloud of cuckoos", he runs most of Pokemon Omega Mart as he is the owner (duh).

Alnair is loud and gnarly, his personality is that of a stereotypical gruff of a military soldier, he runs a mini market next to the Pokemon Omega Mart similar to a CEO of a PMC.

Gaia is calm and is the craftsman of the mart, she runs the tools and utilities.

The shopping center itself:

Like the original Omega Mart at the Fork, a place that is formerly the Human Las Vegas destroyed by a meteor. The Pokemon Omega Mart is also strange in nature, most especially their products. The shopping center is known to teleport every weekend and drink cabinets that are actually portals to alternate realities and various dimensions.
There are also other anomalies such as the storage of this mall is infinite, phone signal that reach to far places, and Free Wifi that gives you endless performance no matter what device you are using.

(I've seen some s**t at Omega Mart. And its awesome)

(Characters inspired by Dr.Wondertainment from the SCP Foundation and Colorful trippiness of Cela08 characters and toyverse)
(Their recently revamped personalities and speech cadence are based off Spamton from Deltarune. His character even fits Omega Mart)