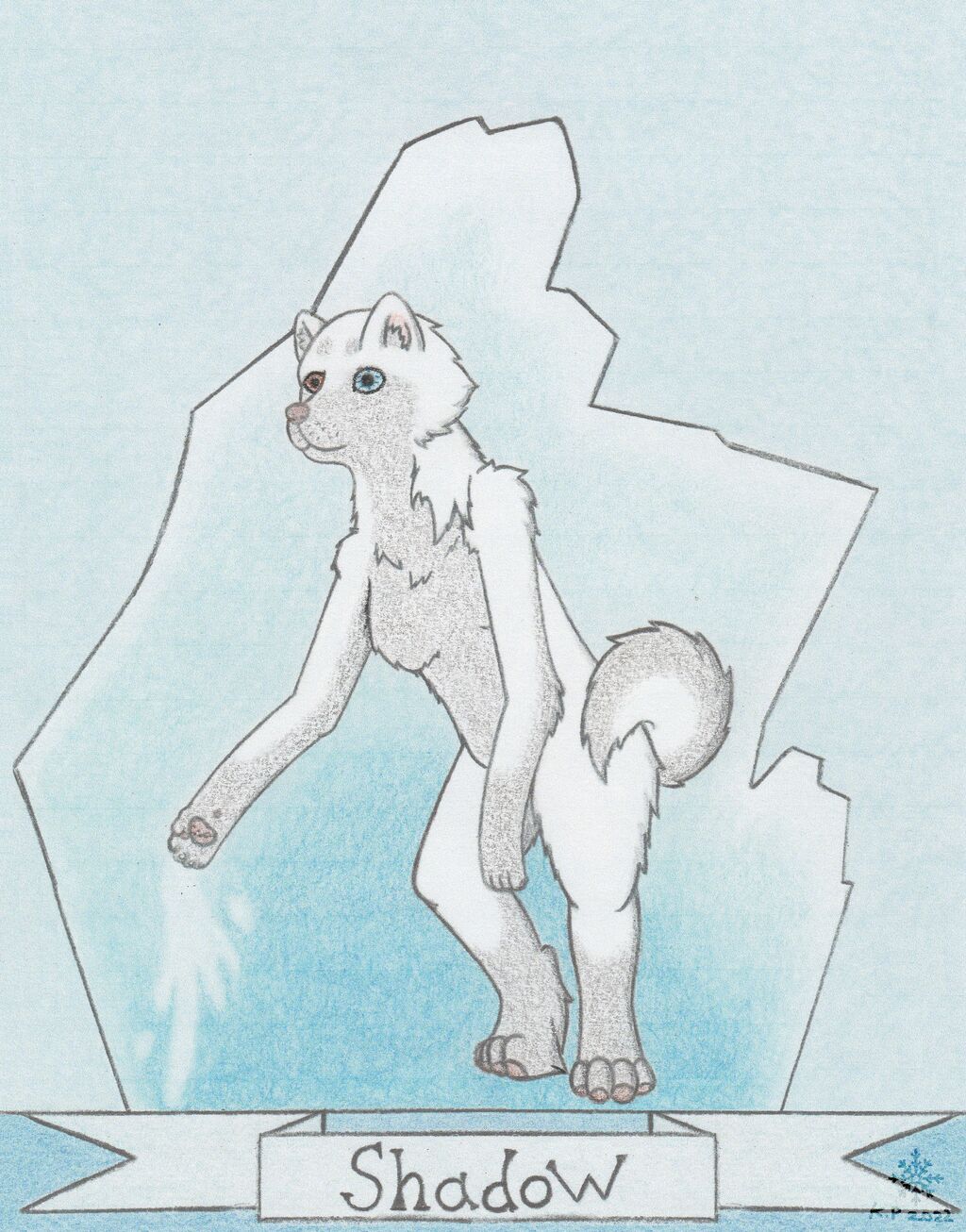 Shadow was born in the land Ahelina in a large family a mother ((finnish lapphund and samoyed.)), father ((Antarctica wolf)) and three brothers, one sister with all different looks and personality's. Shadow and one of her brothers was born with magic powers, she had ice and her brother had wind. The family spent most of the days hunting, playing and sleeping. But Shadow was also pretty good friends with a white tiger male named Demoneye about her age that she almost played with every single day to. But one day panic spread across Ahelina when humans had find their safe haven and began to burn down the lairs and nests, the antros where confused of why the humans did what they did. And no one was ready for the attack but tried their best to defend the land and it’s "people". But it was to no avail they couldn’t be saved or fund safety anyhere, everyone was buried alive and Shadow and Demoneye mead a promise to meet again before the fire eat them. Shadow as everyone else was reborn in to humans throw the years with no memory of the past just dreams. Anyway Shadow was a born again in ur modern time as a Swedish girl she lived in a small town in Sweden with her mom, she was the only child and her parents had split when she was a baby, not that she had a good relationship with her dad anyway. That part of the family acted so snobby and put a lot on her to have that and get this sometimes. And school wasn’t better ether she had been bullied because of her glasses or her not so beautiful appearance all her school years but she had some friends and could always hang with some off the guys in school but she was still always frozen out in school dances and discos so not the popular one. Tho she wasn't that perfect herself she could act out in class and be a real B sometimes. Shadow also suffered a lot by nightmares about the past so she had turned to religion just to ease it a bit. Tho soon enough bump in to Demoneye again when he played in town with his garage band and they got an intent contact as always. She got some of her memories back of him and more when they became a couple even if it was long distance and even if they didn’t do anything like, she didn't want too rush things. And no their relationship was not perfect they fought of his over jealousy and her's anger issues but they always solved by talking and try to changed. When she had become an adult she had left all of her old friends of their bad influence on her and her belifs to turn spiritual instead but was a lot more sceptical to things now. And Demoneye and Shadow mead a new promise with zodiacs as a seal but after that she started dreaming about a vary aggressive and animalistic jackal anthro that try everything to kill her that later turned in to trying to seduce her, she didn't understand why ether but she fall for it and it where easy to found out how it was. It was one off the most popular gods, it was a Egyptian god Anpu well what she believed with the evidence she had. But that was soon proved to be wrong, when she fund out that Demoneye had played Anpu from her dreams and was planning to take his looks in reality to but this was not the first time Demoneye had taking someone else looks and life. He had played with that magic that he shouldn't have and it had turned against him when he gone to far, wake up the real gods that was mad as hell so they use their magic to destroy everything that humans created and turned nature against them tho they turned some humans to the original from give them a second chance to live. Tho it took some time for Shadow to believe gods existed, she need too see one with her on eyes before that happened and that she got when she visit Egypt. Years after she and her mom decided to returned to nature after had tried to live like humans for a long while that didn't work. Shadow still had a lot dreams about Egyptian culture so just wanted to be sure it wasn't Demoneye that she fund out was dead, he gotten his punishment. So Shadow just talked about the zodiac too the ones she really trusted not that it helped the rumors surrounding her but she still didn't want anyone to go throw what she had. But anyway the journey to live in and on nature was long and hard but it helped them change look on things when a long fight between human and anthros broke out make them see things as they real was. But they still where abel to build up a new communit in the middle of the forest that became more animalistic over the years. Shadow even got a new friend in a female deer and meet her anthro family ((the three that had been reborn but they was defeat ages)). That over the years Shadow started to build a good friendship with, she even adopted a wyvern that became like a daughter to her and finally got back to feeling like she was in a good place again.