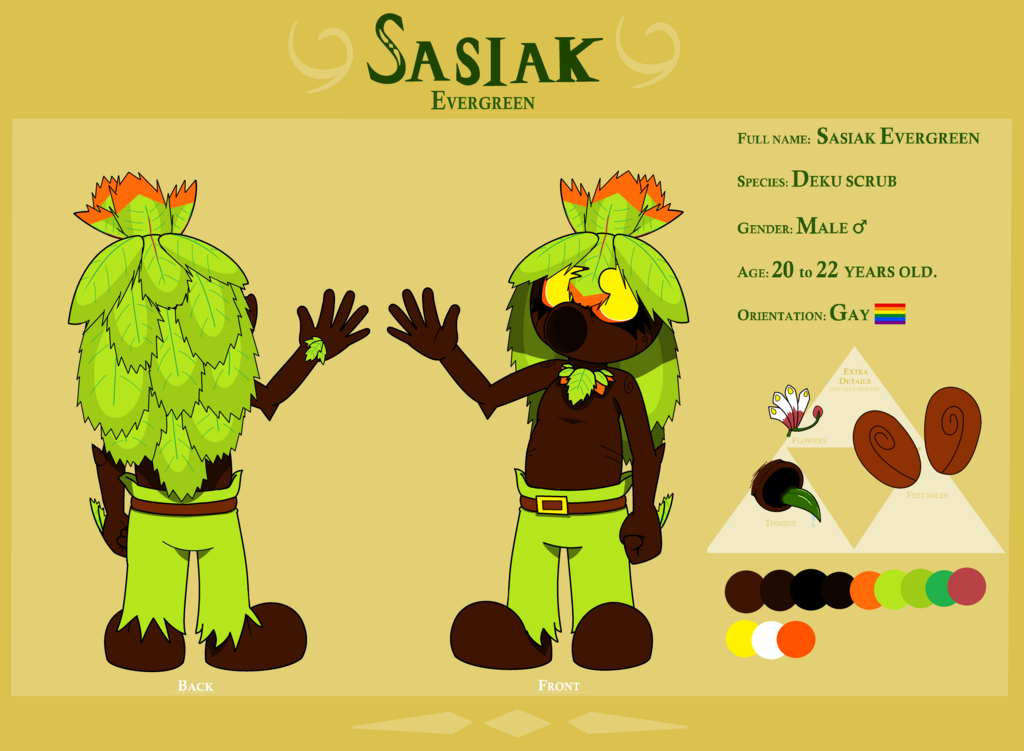 Sasiak is a common Deku scrub that lives in the Southern Swamp in Termina.
He resembles a Lomatia hirsuta, wich is a medicinal tree with effectiveness against different respiratory illnesses and swelling.

Personality
+
• always helps those who need it, or ar least tries to.
• he's a loyal friend who would never talk behind your back.
• very intelligent on the particular subjects that he is interested in.
• always tries to be polite (even when angry af)

—
• making him angry can be relatively easy.
• can act like a coward under stressful situations.
• can be very cocky with the people he doesn't like.
• can be too perfectionist with himself.
• gets too nervous very easily.

Dislikes:
• his leaves being pulled or teared out.
• meat
• waking up late
• children (specially toddlers, they are annoying)
• strong smells
• fire (he's made of wood, that makes him very flammable)
• loud noises
• too loud people
Background/History
The seed that later became Sasiak came from the Lost Woods in Hyrule, in a yogurt jar carried by a hylian merchant that thought it was the seed of a common myrtle tree. He later have the seed to a group of scrubs in Clock Town.
Sasiak was born in the house of his adoptive parents and he lived there happily until he was 18 years old. Then he moved and started working as an herbologist and a toy maker. He seems to be in a relationship with a male Zora named Helves, they seem to keep it very open tho.
Relatives/Family
Unnamed adoptive mom and dad.
Helves (mate)
World/Setting
Southern Swamp, Termina
Body
As any other Deku scrub, Sasiak has a prominent, cilindrical snout (wich is for eating, drinking, breathing, talking, and even spitting Deku nuts), and orange glowing eyes with whide yellow pupils. Sasiak's also happens to have some sort of black mark on both of his inferior eyelids, wich end in three pointy "triangles" that resemble a bit of eyelashes.
He is covered in soft, smooth and dark bark. Unlike normal trees, Sasiak is very flexible.
His leaves are mostly light green, but some of them have an orange tip (this can be because one of his biological parents was a mad scrub). The leaf that covers Sasiak's forehead has marks on it that are the result of him trying to fight some Wolfos when he was younger (there's no need to say that he didn't do very well in that encounter).

Sasiak has big stompy feet, and long skinny legs. His hands also happen yo be very big in comparison with his arms, wich are very skinny as well.

Clothing
He usually wears clothing made of leaves. Mostly pants and a cape, but sometimes he wears a loincloth for comfort and for more leg mobility. Or sometimes he just wears boxers around the house.