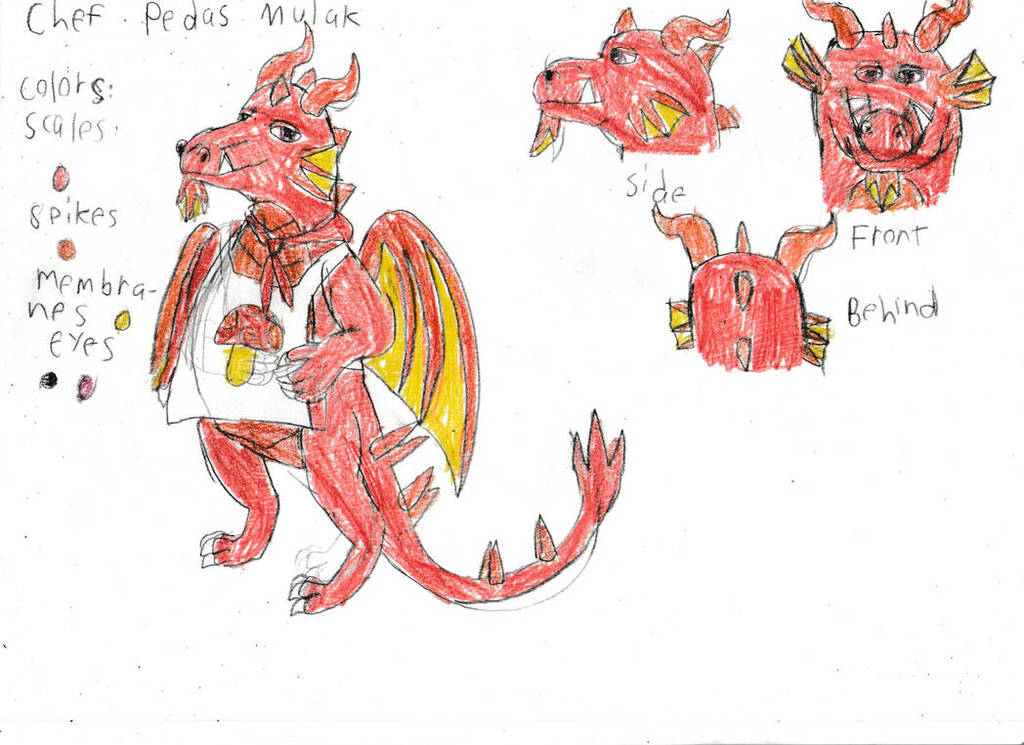 Occupation: Chef.
Last name: Mulak. ( Means Chili in malayan. )
Birthday: 15.7.1817.
Place of hatch: Burning Lands.
Hair color: None.
Eye color: Wine red.
Backstory:
Pedas hatched in Burned Lands, in fire dragon village to two fire dragons, his mother was chef at the time and father a smithy. When he grew older his mother taught him to cook, inspiring Pedas to become chef. As years passed he practiced his cooking and skills with spices, wanting to become master with spicy and fiery food. Wanting to bring out best of his food he kept pushing himself, finding potential in Rovente Mushroom he used it along other ingredients and created his own food, Fiery Special. Feeling successful he kept practing and when he was 30, he became chef and started to work in Dragon city´s Eating Wyvern restaurant along water-ice dragon chef Samaki Rasa who he got crush on when he became 100 years old, he hasn´t told him even this day about it.
Personality: Pedas is very friendly and passionate of his work as chef, loving to make most spicies meals and hear what they think about it. He is fond to children and if they come to ask him to play he may leave his work and go with them, if it´s not important of course. He may not be agile or fast due his weight but he will protect those are dear to him with fiery spirit of fire dragon.
Strenghts: Pedas is excellent cook when it comes to spices along his mastering of fire quite well. He is physically strong foe when needed.
Flaws: Due his weight he is slow and clumsy, making him easy target to hit. And his fighting style is quite un-mannered when he really gets mad, making it easier foes to predict his movement.