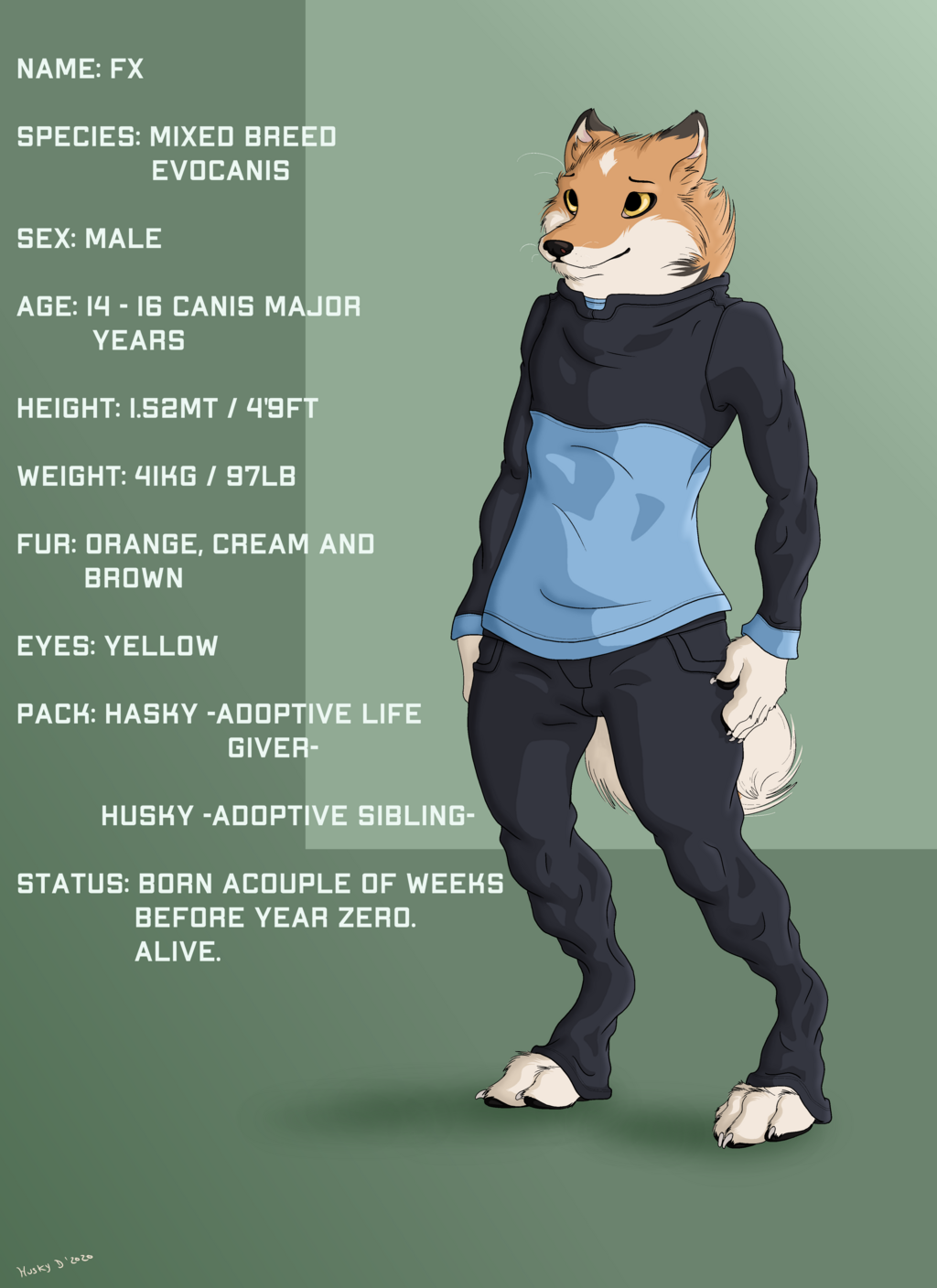 It's time for Husky's little brother, Fx. We've seen him before in the prologue when he was still a few weeks old Evo pup, being saved and protected by a very young Hasky. Now we finally seen him as a fully grown adult.

"Fx belongs to a very special group of Evos. Although considered a post-Year Zero Evo, he was indeed born before, even if just a few weeks. Very small, still in his quadruped stage and defenseless, Fx was very lucky to have survived that day. Being given by Fibi, to her best friend Hasky, Fx grew up with no biological Life Givers. But Evos are never orphans, or lacking of family. Hasky has taken care of him ever since she received him on her arms. Nourished him, raised him and watched him grow being part of her. Next to him, Hasky's biological pup, Husky, grew as nothing less than the closest of brothers to him.

Fx is a very quiet and inquisitive Evo boy. He tends to make a lot of use of the Learning Enhancers as well as digging deep into their knowledge archives. Definitely different in character than Husky and Hasky, fx sometimes shows himself a lot like them, as if adopting their personality due to knowing nothing more but their company. But it is soon noticed how different he is. As Project D.E came to be, Fx showed an almost obsessive interest with it, pushing himself to be included in the D.E Development Team. This threw Hasky and Husky off a bit, as they knew nothing more than the happy and peaceful life they had together. but Fx was not alone, as Husky did not hesitate to join him; he would never leave his brother alone in such an important mission.

Ever since Project D.E became a part of his life, Fx has shown himself a bit more distant and overly focused in the Development Team. this has started to worry Hasky and Husky, as they have no idea if Fx has more personal motivations involved."

Fx's name is in reality the joining of both his Life Giver's names: Fibi and Xy. Hasky effectively named him Fibixy, but has called him "Fx" for short ever since he was a very young pup. The name stuck and very rarely he will mention or be called by his full name. Fx was also one of the first characters ever created in my universe. He was also a fox, which was later scrapped as it didn't fit my story's lore. He's now a mutt, mixed husky-ish with shiba inu.