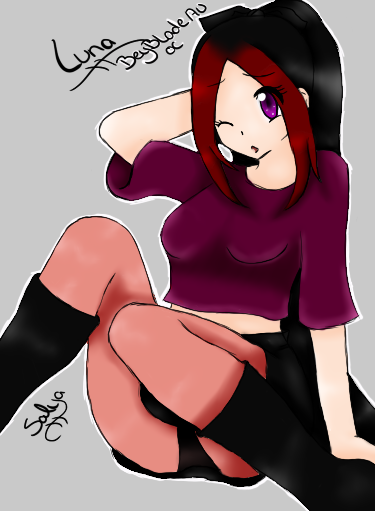 Story: Luna was going to take care of her horse Star when Star's mate, Necromancer just had to be pervy and knock her over. He got to see what's under her mini skirt BEFORE Star kicked him. XD

OCs: Star is a shifter but is a pure breed unicorn. Her true name was Stardancer but she lost her horn. She does get it back but she enjoys being a 'normal' horse. (she's not an beyblade oc, but an original oc for original story that I need to do. lol )

Necromancer isn't my oc, but he is a fire demon horse that appears like a shifter. He's a pure black horse as Star is pure white. He's prevy, loves to play and has 2 other brothers. ((This horse is used for beast rps. lol But anyways he's like Star, not an fandub oc, but an original oc for a story... that I or Amia need to do. lol ))

Luna is the older sister of Reyna. She has Rei and Rai as 'pets' as Reyna has Lee. lol

Luna and Star © Me
Reyna and Necromancer © My RIP bestie