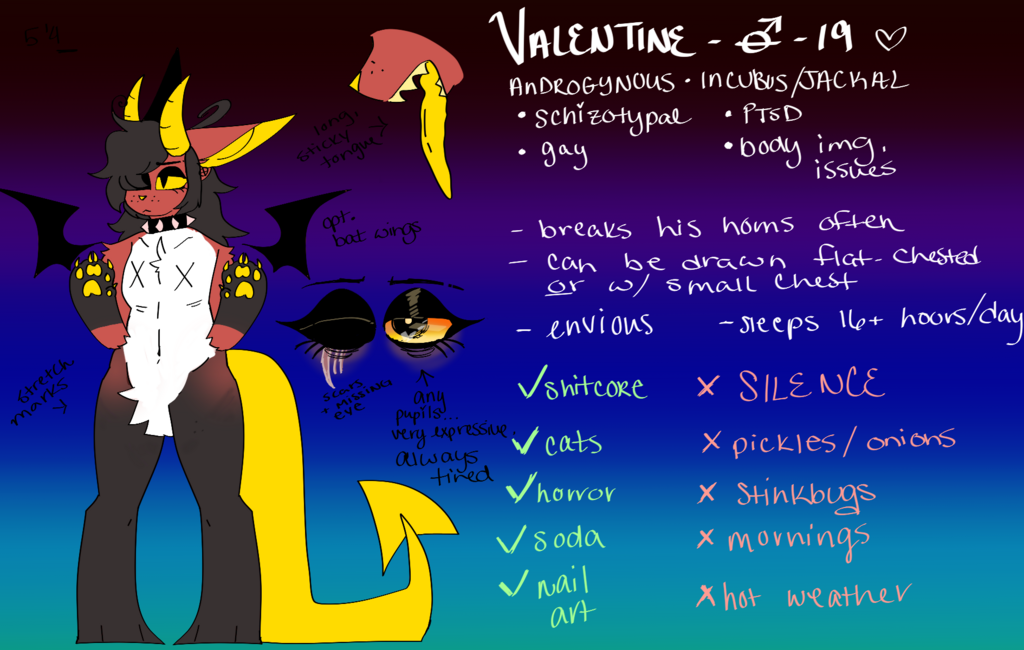 val was born to a jackal mother & a demon/hellhound father. his father took him away from his mom when he was young to raise him to be the leader of the cult his father was central to, but val didn't want to and he often went against what his father wanted. in a fit of rage his father ripped his eye out when he was 8. oftentimes he was surrounded by people who would threaten to or attempt to kill him because they saw him as blasphemous/a heretic to his father's beliefs.

he ran away when he was 12 and lived on his own. it was hard obviously but he ended up moving in with a close friend who later turned out to be a horrible influence and manipulative, often threatening val if he wanted to leave or be around other friends even for a little.

he had to leave once again but waited until he was 18. by now he's been thoroughly shaken up and shown that people fucking suck and he's been through all kinds of shit. being an incubus he SHOULD have been able to morph to take on any desirable form to a man he fell for but it was impossible for him to do much outside of his wings and slight changes to his chest. he'd never had a real relationship due to looking like an emaciated husk. he's grown cynical of affection and true loyal romance until he met his bf. [ my bf juicevox's fursona rover ]

val sees himself as an unfuckable freak most of the time and he is very vain. given the chance he'd wear a mask 24/7. seeing people he deems more attractive pushes him deeper into his spiral of self-loathing.

most of his current day life revolves around him trying to clean himself up and make something of himself with his bf's help, but part of him wants to go back and kill his father; the only way to kill his species [ val is easier to kill due to not being purebred ] is decapitation so he knows unless his father has been assassinated that he's still alive. while he wants revenge, part of him misses his father despite his horrible abuse, and he misses his mother even more.

-his blood is darker and browner than regular blood- think oldish blood. it smells more rancid as well and tastes more acidic and tangy. due to his demon blood he doesn't have a traditional blood type, but injection or transfusion of any other blood makes him violently ill. he can't die from bloodloss.
-he vomits frequently. force of habit? nerves? who knows but its disgusting
-his saliva is stickier and thicker than usual. it tastes faintly of blood.
-despite his low self esteem and body dysmorphia he likes dressing up in skimpy clothing/rubber clothing. he believes he looks better covered up.
-usual inventory includes: a bulk bottle of dph, cell phone, pocket knife, and germ-x
-he's very jealous but manages to keep it to himself.
-he has weird tendencies if he likes someone; taking pics of them wherever he goes, thinking of them over the smallest things, etc..