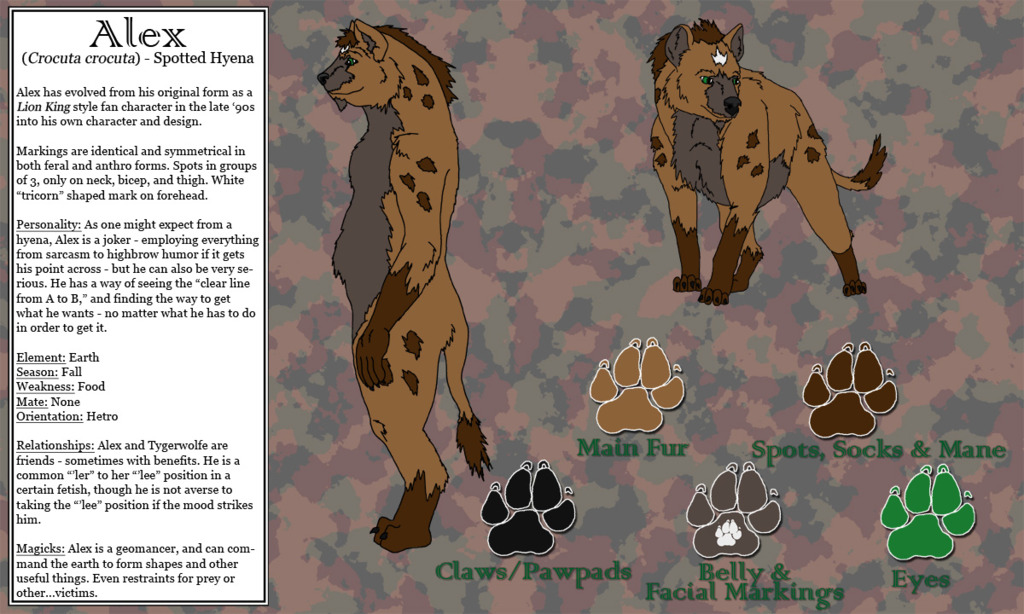 I think this is the first time Alex has had his own character sheet. It's really about time. Maybe this will encourage me to draw him more.

Markings are identical and symmetrical in both feral and anthro forms. Spots in groups of 3, only on neck, bicep, and thigh. White “tricorn” shaped mark on forehead.

As one might expect from a hyena, Alex is a joker - employing everything from sarcasm to highbrow humor if it gets his point across - but he can also be very serious. He has a way of seeing the “clear line from A to B,” and finding the way to get what he wants - no matter what he has to do in order to get it.

Loves food, loves to laugh, and loves both tickling others and being tickled.

In the late '90s, Alex appeared in my drawings as a Lion King style hyena, based on Banzai. His original personality (and name) came from the character of Xander on the TV show Buffy the Vampire Slayer. He's evolved quite a bit from there, however.

(This concerns the character as he exists in my novel's world - not relevant to commissioners.)

Had an uncle who was killed by a gang of "purist" animals that call themselves the Chosen, and believe that no impure (non-purebreed) animals have the right to live. His uncle was half hyena and half meerkat.

As his uncle was his uncle by marriage, not by birth, Alex himself is a pure blood hyena. However, he hates the Chosen, and anyone involved with them.

With the exception of his "white tricorn" forehead marking, Alex's colors are all brownish earth-tones.

Markings are identical and symmetrical in both feral and anthro forms. Spots in groups of 3, only on neck, bicep, and thigh. White “tricorn” shaped mark on forehead.

When he wears clothes, he has a thing for camouflage shorts and jacket, usually a black tank top underneath.

Sometimes has a silver hoop earring in his right ear, but not always. The hole is always there, but is hidden by his fur when he isn't wearing the earring. It belonged to his uncle.

Hetero, though he's a bit of a voyeur and will WATCH any orientation without shame.

In anthro form, genitals are human-esque, with a sheath. In feral form they are classic hyena shape. Nipples may become visible through fur if aroused.

Alex and Tygerwolfe are friends - sometimes with benefits. He is a common “’ler” to her “’lee” position in a certain fetish (tickling), though he is not averse to taking the “’lee” position if the mood strikes him.

Alex is a geomancer, and can command the earth to form shapes and other useful things. Even restraints for prey or other...victims.