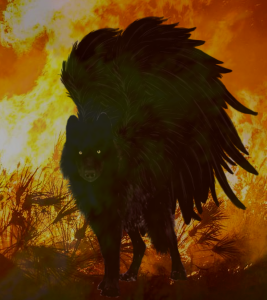 Valen belongs to an ancient race of wolf-like beings, referred to as Dieuloup. Each Dieuloup possessed a pair of birdlike wings and a unique set of supernatural abilities. They were gods among wolves. Most of the species was killed off by human tribes, leaving him as the last of his kind.

Valen wandered alone until he met a pack of wolves, who gladly excepted him. They worshipped him and appointed him as their new leader. He gladly took the role and caused the pack to thrive for many years.

Valen is known for being something of an enigma. He is highly secretive, and few know of his past. He does what he thinks is best for his pack and if that means violence, then violence is what will happen.