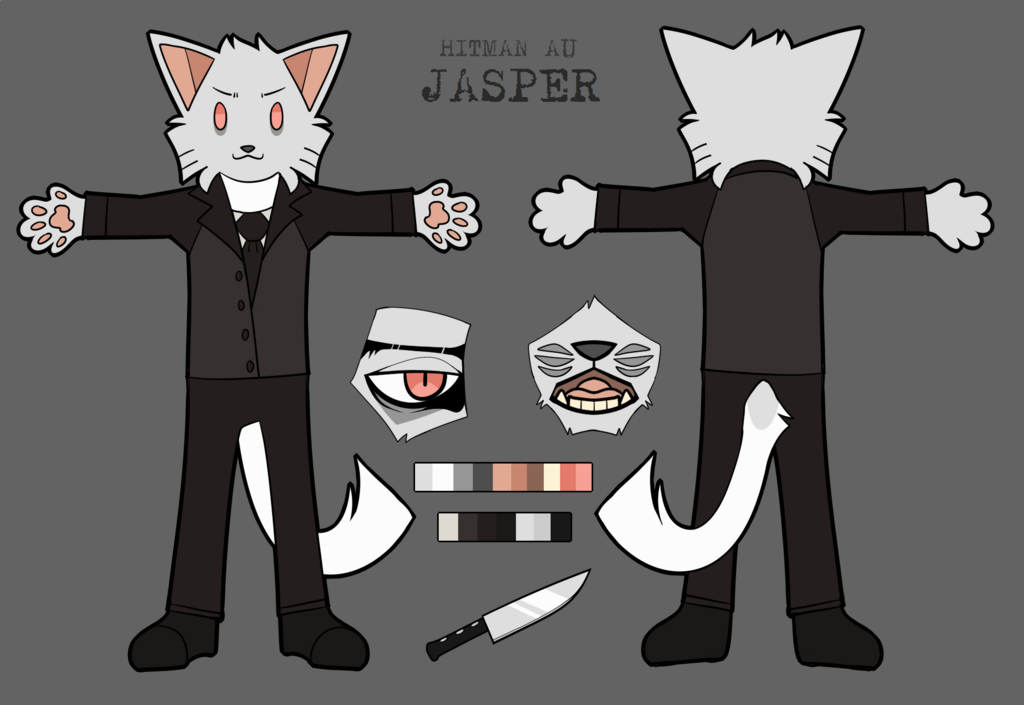 ★ Personality: Chaotic, impulsive, fun-loving, loving, anxious
★ Background:
Around the age of 17, Jasper ran away from home. Nothing is known about their life before becoming a runaway -- asking only prompts them to claim that they remember nothing. Before joining the organization, Jasper remained homeless and their days were often spent traveling and searching for their next meal, which often involved petty crime such as theft and pick-pocketing. Such actions ended poorly for Jasper due to their oblivious and clumsy nature -- their thefts frequently involved them filling their pockets in front of security cameras, and their attempts to pickpocket often led to a black eye and a bloody nose.

Jasper’s run in with the organization happened accidentally when they began desperately pursuing the same target as Nitty. While Jasper’s intentions were only to rob the victim, Nitty’s was to kill. In a coincidental turn of events, Jasper unintentionally assisted in the success of Nitty’s mission, and in understanding Jasper’s situation, Nitty confronted them with a proposition: offering Jasper a home in exchange for their continued services. Thrilled at the thought of having a reliable shelter and a source of food, as well as the possibility of acquiring friends… it was an easy choice for Jasper to make.

In their new line of paid work, Jasper views each mission like a fun game, treating each victim with an unexpected air of kindness. This skill makes them useful as bait to lure in targets for others to take out. Jasper is physically weak and uncoordinated, so they prefer to disarm or kill mobile enemies from a distance with any long-range weaponry. However, they always keep a standard kitchen knife on their body for self defense… as well as for dispatching an enemy who is immobile. During an interrogation, Jasper enjoys teasing the victims in a friendly manner, often cracking jokes in between issuing threats and administering violence. Whether this reaction is genuine or simply a means of coping with the mental strain of their job is unknown. What is certain, however, is that Jasper fails to take their line of work very seriously, and their excitable and impulsive personality frequently proves detrimental to their missions. For this reason, Jasper is rarely allowed to work alone, and any individual paired with them is advised to keep them under strict and vigilant supervision. Jasper cares immensely for their fellow coworkers, viewing the whole group as a replacement family.

Jasper is a chronic insomniac, occasionally staying up for two or three days at a time. During episodes like these, Jasper’s work suffers significantly more than usual, and it can be difficult for them to focus and remain spirited. Jasper is also an artist! They keep many sketchbooks, and can be frequently found scribbling in one during their free time, but they vehemently refuse to show their work to others, with very few exceptions. The privacy of their sketchbooks is one of the only things that Jasper is uncharacteristically stern and aggressive about.