Nigh by The 496th Silverbolt 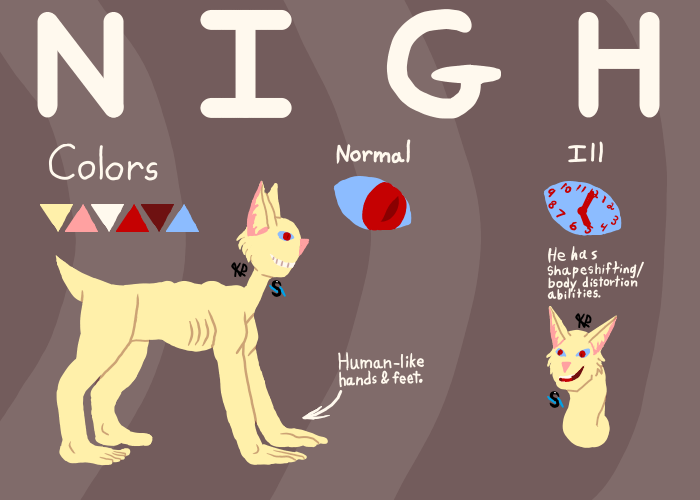 Behavior: Eccentric, Nigh is a nuisance, constantly bothering other creatures around him just for the sake of attention. His livelihood relies on the direct attention of others after all. As a result, he doesn’t kill other creatures he meets unless he’s starving for attention. He’s also extremely extroverted as a result, often coming across as too creepy or just way too friendly. His eidetic memory memory doesn’t help matters either.

Anatomical notes: Nigh’s body can defy the natural laws of physics thanks to how his body functions. By utilizing the energy he receives from the direct attention of other creatures, Nigh can override the limits of his organ systems temporarily and stretch them to surreal proportions. This can take quite a bit of energy depending on the extent to which his body is distorted, so it’s important for him not to use this ability unless he knows other creatures will pay attention to him. If Nigh receives no attention for too long, his existence would gradually deteriorate away, leaving nothing behind.

Other abilities: Nigh’s a shapeshifter as well, but again, the effectiveness of this ability relies on how much other creatures are paying attention to them. Less attention towards him means this ability is less effective overall.

Misc: Nigh greatly fears clocks, especially analog clocks, as their mere existence reminds him of the amount of time he has left to receive attention again. In some instances, it may even cause him to become completely immobile, as indicated by the more clock-like eyes that develop in place of his normal ones. In addition, his albino-like traits and appearance can cause some pain within direct sunlight and such, but Nigh finds this to be a suitable trade-off, as it’s during the day where he often gets the most attention.