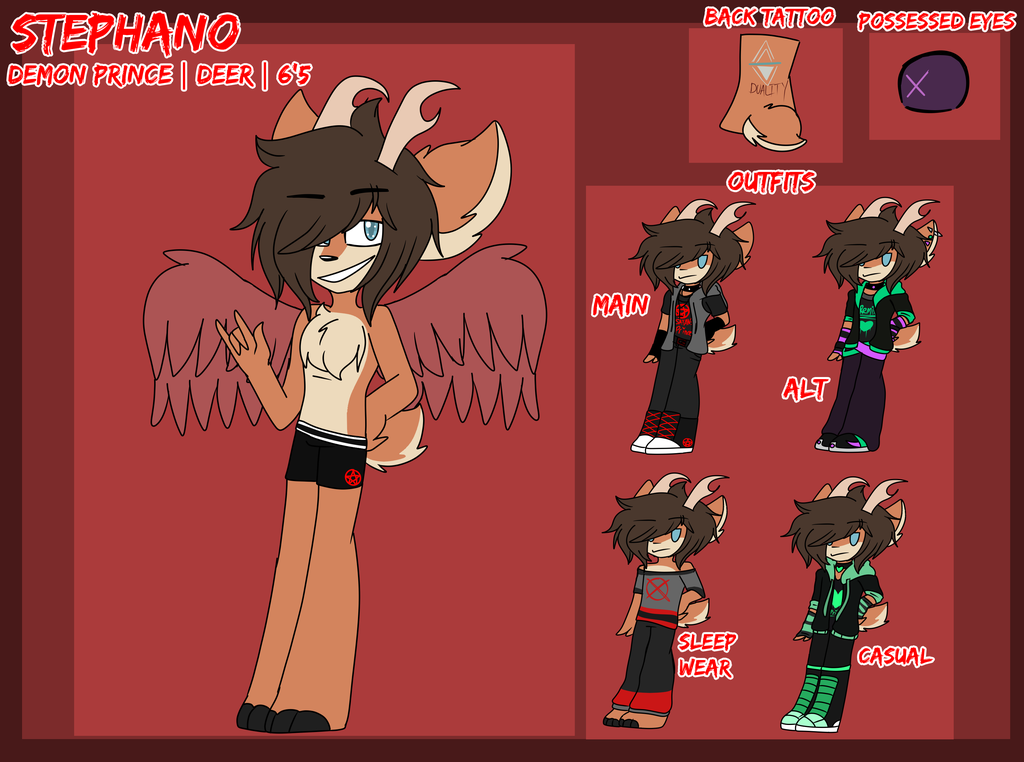 inner demon: SIN (alive, but can only be seen by stephano)

Occupation: Assassin for an organization

🖤His Boss Zane being a slow person when giving his targets

🖤Being forced to do certain things

🖤 being called cute,little, and boy

-Levitation (with or without wings)

backstory: (w.i.p, so there may be changes)

In May 6,2002, a fawn by the name of 'Stephano', the son of King Lucifer and Queen Evie Skullz, was born.
Stephano is a sweet, yet fragile little boy who adores his mother and father equally. When Stephano
was 5 years old, he heard the news that his mother was diagnosed with a life taking disease and she only has
3 years to live. When Stephano heard these news, he started to sob and cry. His lava like tears rolled down his cheeks,
knowing that he is gonna lose his only mother. When Stephano was 8, his mother, Evie, has passed away due to the disease,
leaving only Lucifer alone to take care of their little fawn.During Stephano's school days, he would be constantly
bullied and pushed around by others because they know how fragile this little boy was. Despite the pain he gets, he has
made 2 new friends, one being a small cat boy by the name of Adam, and the other being a small rabbit boy by the name of
Dominic.They were best friends ever since 3rd grade. As 3 years passed by, an awful icident happened,which changed
Stephano's life forever. Stephano, who was 11 at the time, was playing with his 2 amazing friends.
while playing, Stephano tripped onto a rock, hitting the ground. When Stephano hit the ground, the older kids around him
started laughing at him. Stephano looked up at the laughing kids, as he started to tear up before running away to
a tree away from others. As he was sitting by the tree, he started to cry and sob into his arms, when suddenly he hears
a demonic voice in his head."Kill them...kill them all" the voice would say in the crying deer boy's head.
"n-no...i can't... d-daddy told me to stay good and never kill anybody...." the poor deer would whisper out through
his whimpers. The voice gets louder, saying "DO IT... KILL THEM... THEY DESERVE IT.."."n-no.... i can't...." Stephano
replied to the voice in his head. "alright, if you can't do it...THEN I WILL MAKE YOU..." the voice replied in an
angry tone, before the inner demon possesses the crying deer. "W-WHAT N-NO.... P-PLEASE NO...." Stephano replied as
he shivered and his eyes became a dark purple tint color, with a light purple x for the pupil. When the shivering stopped,
the now possessed Stephano turns his head towards all the kids, including his two best friends before taking out
a small sharp knife and begin to run towards the kids nearby. As he ran, he jumped and slashed at each kid,
slitting their throats with just one swipe, making them fall to the ground, dead and bleeding from their throats.
Every kid but Adam and Dominic had faced the possessed deer's wrath. Adam and Dominic came back, just to see their
best friend's back turned, holding the now bloody knife, which is dripping in blood.The two boys was shocked to see
Stephano all bloodied up, so they came over to him, asking if he was okay. Without replying, Stephano turns around
and slashed at Adam and Dominic's throats, killing them in an instant. When Adam and Dominic hit the ground, dead,
Stephano finally snapped back to reality, but his eyes are still posessed. Stephano looks at the bloody knife and the
bloody corpses of the kids he has killed on the ground. He starts to break into tears. The purple tears flows down his face
as he realized what he has done. "No....no...noooo...what have i done?" Stephano asked while in tears.in deep regret and
grief, Stephano dropped the bloody knife and ran away from the scene while in tears. Stephano, now 17 years old, will
never forget the horrible life he had, and he has continued to live with this life, for the rest of his life.