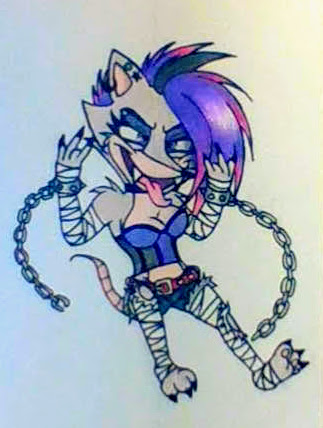 𝗦𝘁𝗮𝘁𝘂𝘀 Possibly in a relationship With Dark Bandicoot
𝗠𝗲𝗻𝘁𝗮𝗹 𝗦𝘁𝗮𝘁𝗲 Maniac
𝗜𝗻𝗳𝗼 Psycho is an odd looking bandicoot with a rat tail, and an edgy appearance. She's known to being one of the most craziest characters in the whole series, due to her having the love of burning down places, and blowing them up, and breaking out of asylums, and blowing them up too. Psycho was originally a bad guy, but has surrendered from being defeated by Crash. She was a hidden boss in the 3rd Crash game "Crash Bandicoot Warped" where she made her first appearance in 1998.
Then she was seen in a short clip in a wanted poster in the 5th Crash game "Crash Bandicoot Twinsanity". Her most recent appearance was later on in one of the newer games, she was a playable character in the game "Crash and Psycho Bandicoots Untie" in 2017. She Breaks out of a mental asylum and teams up with him to defeat Dr. Cortex. Psycho has a fraternal twin brother named Emerald Bandicoot. They have very different features but are considered to be twins. She also has an older brother named Thrash Bandicoot, who's a little wack and is a total jerk. And she has an adopted sister named Fruity Bandicoot a.k.a. "Fake Coco". She's also had history with other close encounters such as Ripper-Roo, Evil Crash, and Evil Coco. There's also a theory that her and Dark bandicoot, (who's Cortex's mutated son) could be dating. It hasn't been fully confirmed, but it's possible. They've also had a long history together.