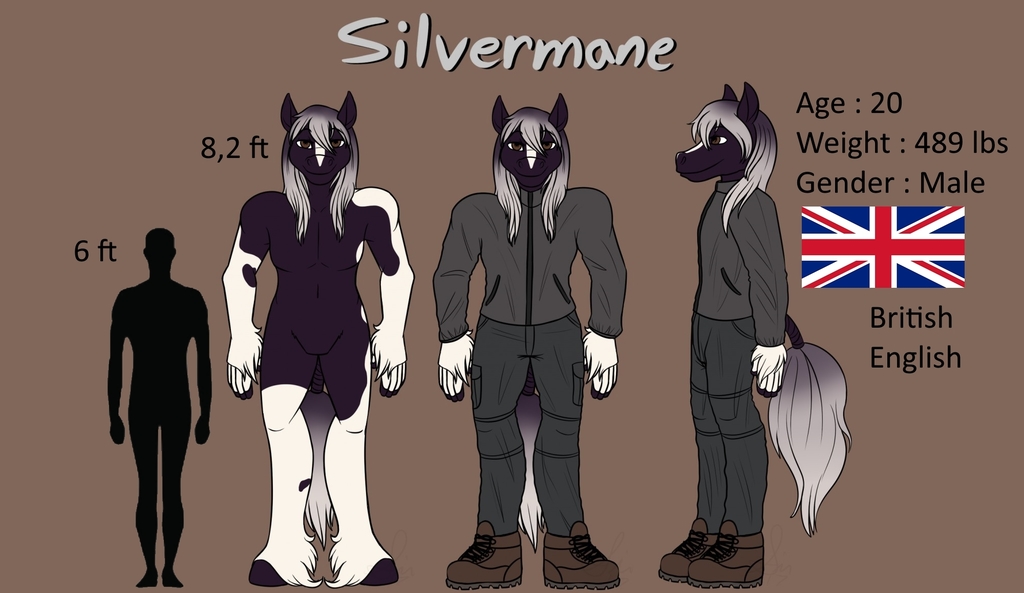 Description
A tall and with broad shoulders but a silmer overall build. Main body colour of a deep purple near black with white socks on his extremities with one or two patches of purple within them. His hands and hooves have fetlocks which cover most of his hands and the backs of his hoof. His long mane ranges from grey to blackie purple. His muzzle is divided by a single white strip that runs from his noses tip into his mane. His two equestrian ears stand up out of his mane. Both eyes are a soft brown.

Bio
Born in Durham England Reece Silvermane looks like a average horse on the outside beside him being rather tall, however under this normal body is a powerful example of lost equine strength. This all due to his genetics's and a ancient gene from prehistoric equines where stronger, tougher and faster then there modern counter parts. He grew up knowing of powers causing him to be more of a introvert as he avoid sport and physical competition focusing more towards intellectual pursuits. He grew up on farms where he performed manual labour while at college. At college he studied animal care allowing him to learn how to help care for other non anthropomorphic animals. Later in his life he met Jay the Forse and the two fell in love and started dating after.

Powers
Reece has super strength, and enhanced durability in a limited fashion. With the ability to lift significant amounts of weight, he is also highly durable to damage being able to shrug of 9mm pistol rounds with only a bruise or small cut even at point blank range. This is due to his genetic lineage, it is said that his ancestors could lift lift upwards of 100,000 lbs though his great grandfather could lift steam locomotives weighing 60,000 lbs above his head. He can reach a sprinting speed of roughly 35 mph and hold it for a significant amount of time. Reece is strong enough to lift almost anything in theory however his lifting capacity is hindered due his bones being unable to support the weight this weakening was caused as the gene became more diluted as the gene which effects bone strength is only found within males of his family tree and his been diluted and weakened though breeding.

Macro info
Height : 3.5 miles
Weight : 26506 tonnes
Bio (macro )
As a giant Reece is highly destructive and takes pleasure in taunting and dominate. He is consider remorseless and likes to use both bare hooves and boots to crush while also unties his immense strength and other assets when rampaging. He has a fondness for taunting military force’s and then decimating them. He is rarely unaware but sometimes acts it. As a giant few can rival his dominate nature. Once passed 1000ft in height he become impervious to any weapons short of nukes and even under 1000ft he is hardy and requires a lot of force to injure. When past a mile no man weapon can do any damage, nukes can be felt but are consider a tickle. He can rampage though two main means, firstly though the summoning of smaller cities or via using a device that is similar to the gun to grow himself to what ever size he wishes, it also allows from shrinking, this embed under his skin and controlled mentally, though is device is limited in it's use to the draining effect it has on him.

Image can be found here :