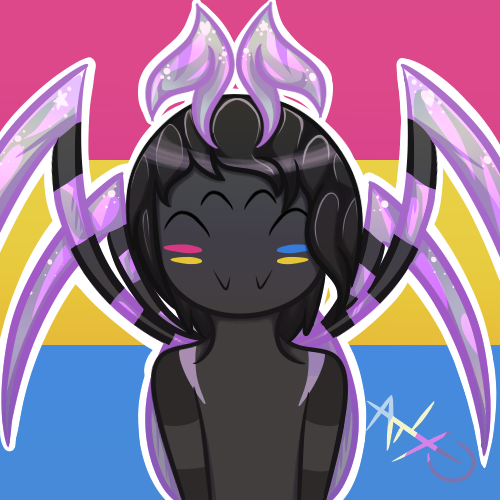 "Aww, what's wrong? Are you afraid of spiders? Hmm, I like that." -Astraknie

Astraknie is an astral spider that was designed in January of 2018. She serves as my secondary fursona, and is based off a scrapped character from a game I attempted to design.

In her humanoid form, Astraknie has grey skin with holographic purple markings. Her abdomen is connected to her backside as if it were a tail. She has a fluffy pink shield over her abdomen and black hair on her head. Her pedipalps migrate up her head and act as horns, and she retains two pairs of eyes.

In her Feral Form, also known as her true form, Astraknie resembles a peacock spider. She has Anxo’s mark on the underside of her abdomen.

Astraknie is an astral spider, an ethereal, intangible being that feeds off the negative emotions of other beings. As such, she wanders through the astral plane searching for easy prey. She may linger for some time over victims who suffer from mental illness or who are suffering hardship, draining away their spiritual energy until they are left feeling hollow and empty. Often, her prey do not even realize they have become hosts to spiritual parasites. If she finds a particularly tasty host, she will materialize before them and attempt to seduce them. Assuming her success, their souls will surely be drained and devoured by Astraknie. She shows little in the way of preference for the gender and species of her prey. While part of Astraknie takes great pleasure in the suffering of the living, she also feels a lot of regret for the pain she causes. The nature of her existence as an astral spider forces her to drain the spiritual energy of others, but other ethereal beings stay away from astral spiders for fear of becoming prey themselves. This leads to a deep void inside Astraknie, as she longs for companionship that she will likely never have.

While most astral spiders are soulless, construct-like beasts that exist only to feed, Astraknie is granted humanoid consciousness through Anxo’s mark. The mark is also responsible for her ability to shift through astral planes and the physical plane at will.