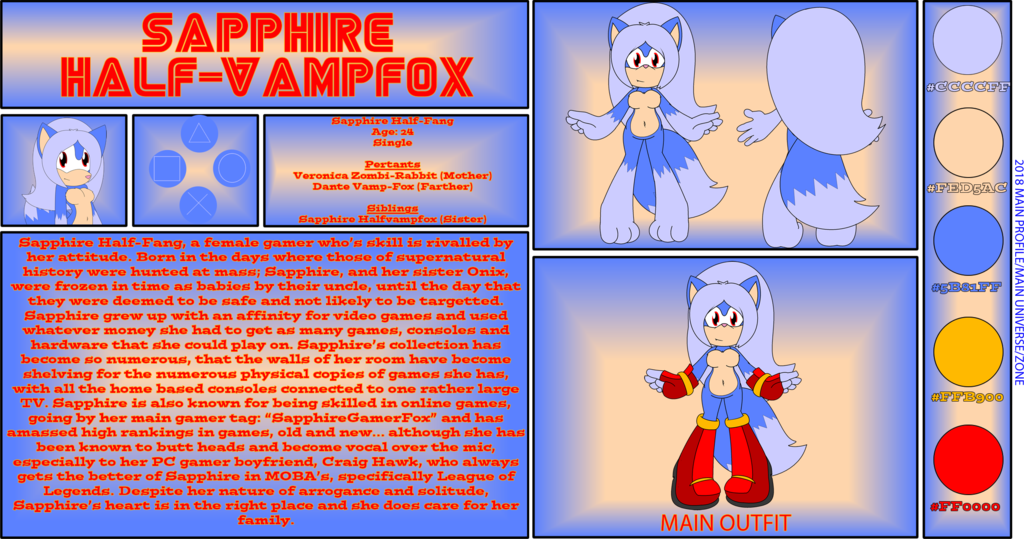 Sapphire Half-Fang, a female gamer who’s skill is rivalled by her attitude. Born in the days where those of supernatural history were hunted at mass; Sapphire, and her sister Onix, were frozen in time as babies by their uncle, until the day that they were deemed to be safe and not likely to be targetted. Sapphire grew up with an affinity for video games and used whatever money she had to get as many games, consoles and hardware that she could play on. Sapphire’s collection has become so numerous, that the walls of her room have become shelving for the numerous physical copies of games she has, with all the home based consoles connected to one rather large TV. Sapphire is also known for being skilled in online games, going by her main gamer tag: “SapphireGamerFox” and has amassed high rankings in games, old and new… although she has been known to butt heads and become vocal over the mic, especially to her PC gamer boyfriend, Craig Hawk, who always gets the better of Sapphire in MOBA’s, specifically League of Legends. Despite her nature of arrogance and solitude, Sapphire’s heart is in the right place and she does care for her family.