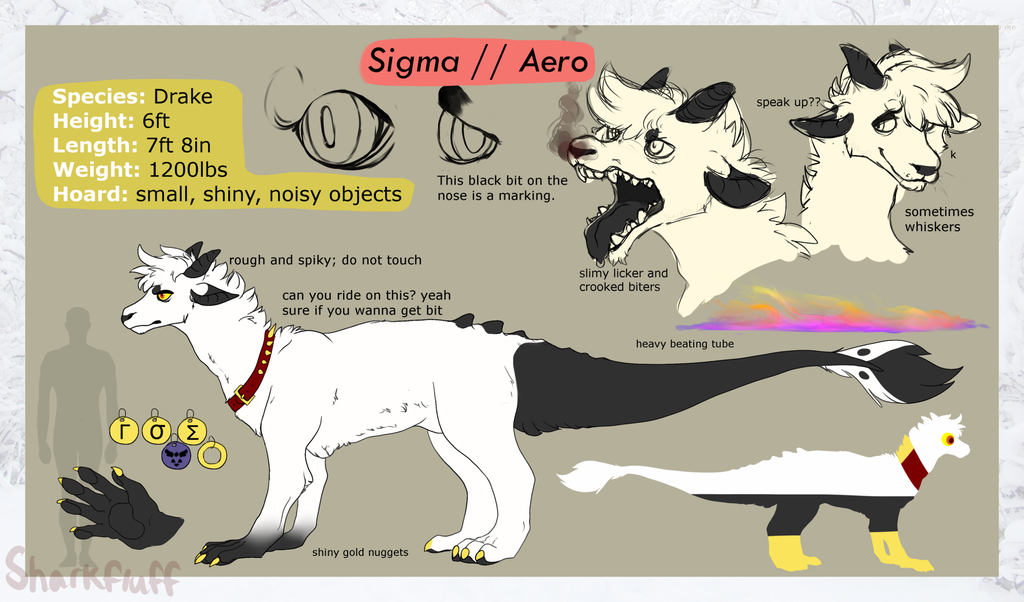 For updated info, For future updates on info, check out this page!

This is Xeno-Sigma/Sigma. Her nickname is Aero.

She is a bizarre creature from outer space that has taken a fused appearance of observed animals to create a drake-like creature.

She does not understand Earth customs, and cannot be bothered to learn them.

- Sigma is incapable of turning her ears forward. The muscles are weak.

- She has an extremely powerful bite; more powerful than a crocodile's.

- Her saliva is venomous. It won't kill you, but will leave one immobilized for a short time (she rarely bites, though)

- Her ears may look useful, but they are not; she relies heavily on @Theory/Theory for hearing.

- She can see and feel exceptionally well and can not tolerate sharp pain.

- She possesses seven, fully functional eyes, but rarely opens them all at once. Fire
Aero is extremely hot inside of her body and expels this horrible build of of heat through short coughs and long exhales through the nose. Occasionally, in dry enough air, her element loaded saliva will catch fire during a cough or sigh. This does not harm her in any way. While undesirable, she can also force a stream of fire through hard belches and a deep breath.. These are damaging to her esophagus.

- Vastly prefers freezing climates due to her boiling insides and not wanting to burn to death.

- She hoards shiny, noisy objects, such as bells, keys, medals, coins etc. She enjoys collecting elaborate swords the most, as they are difficult for her to come by.

- Will wear smaller parts of the hoard on her collar in addition to her tags.

- For the most part, she is in a state of lethargy due to her overheating issue, but can, at times, be extremely aggressive.

- Willing to do some strange things to get mundane objects.

- While assertive, she is not inherently aggressive. However, she is not afraid to get into a fight.