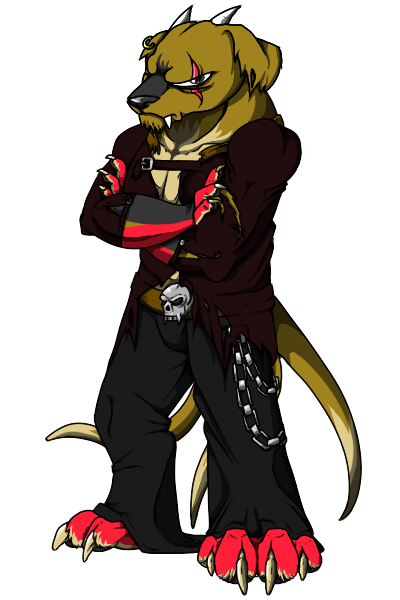 Personality: Hate incarnate. Cyneas is the epitome of anger and will kill you if you so much as look at him wrong. However, just because he was predestined to be hateful, he's more of a product of his upbringing than anything else. He's resentful that he has no true parentage, and over the centuries it's come to consume him. Don't bring it up, though, unless you just want to die. He also doesn't care at all about what people think. He'll do anything and say anything, regarless of what anyone thinks.

-He was born from the rage that consumed Cerberus after being defeated by Hercules.
-When Cerberus retired from his position as guardian of the Underworld, Cyneas stepped up to take his place. He wasn't a very good guardian, however, and Hades decided his 'talent' for aggression could be used elsewhere. Cyneas now sits at Hades' right hand as his faithful companion.
-Cyneas can summon demons from the Underworld to do his bidding whenever he pleases, but only uses them when he absolutely has to. He also has incredible powers and could use them to bring about the apocalypse if he felt like it.
-He can also open doors to other worlds and see into parallel dimensions.
-Despite all this power, Cyneas is actually a step below the alpha of his pack, Jeremy. The only thing keeping him from taking the title of alpha is the fact that he cares for his pack mates. He could never hurt Jeremy and will defend him to the bitter end. After all, his pack is really the only family he's ever had.