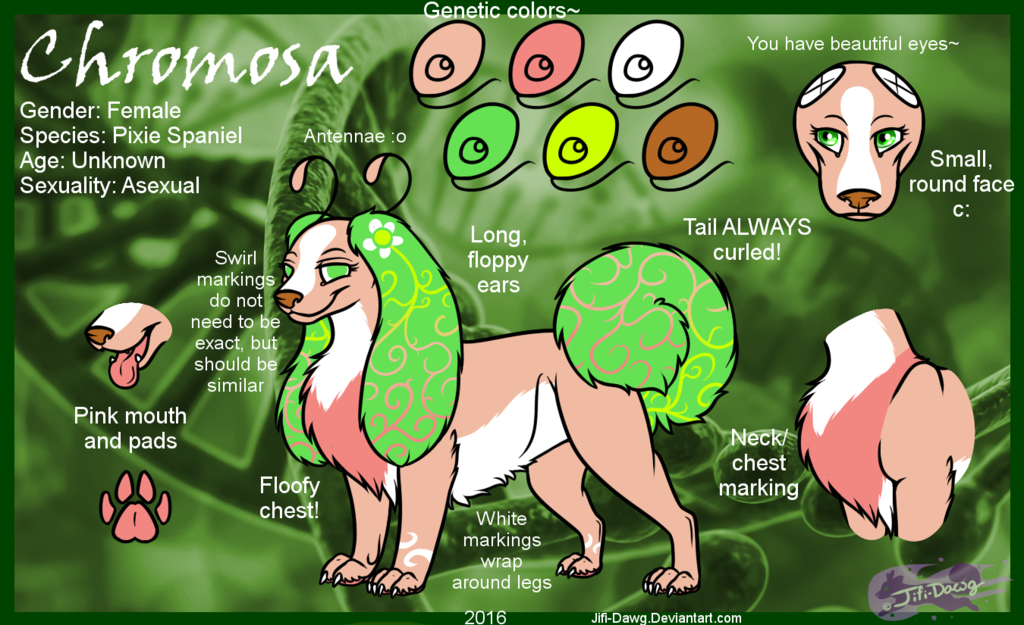 OUTDATED DESIGN, WILL BE REVAMPED!

Personality: Once she was a stuck up bitch, but years of looking after her pack have softened her. She's more of the caretaker and healer of the group now. She's very patient and wise, but also careful about who she shares her knowledge with. Having saved Kenari as a fetus, she is especialy loving to her and teaches her all she can. To her, Kenari is the daughter she was never able to have.

-She's one of a kind. Oringally a single-celled organism millions of years ago, she was somehow gifted with immortality and evolved along with life itself. She knows all there is about evolution and reproduction. Some think of her as the embodiment of evolution itself.
-She can completely change her species at will, but prefers to be a canid.
-Her mind is so complex that she can see into others' genetics and control growth and reproduction. Her powers even enable her to manipulate life itself and fuse other beings to herself for a short time.
-I made her while learning about chromosomes and DNA in freshman Chemistry, hence where her name and powers come from.
-I originally designed her with pixie wings, but decided to let her float in mid air instead.
-In a fight she would use a small amount of her powers, since she values life and would never harm anything if she didn't have to.
-She's extremely fertile and can even reproduce asexually, however she decided thousands of years ago that creating another being like herself would be too dangerous.
-If she were to become pregnant her cells would overload the fetus and either kill it or give it immortality.