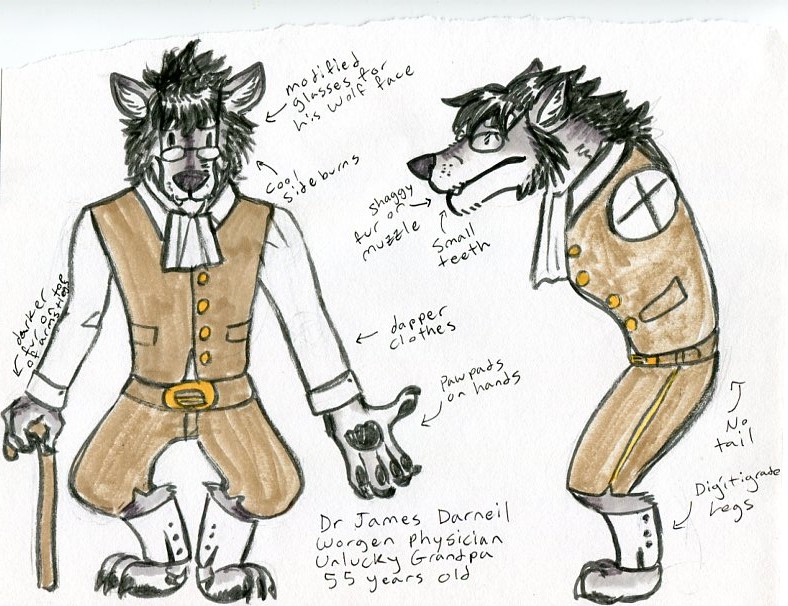 Formerly a country doctor in Gilneas, James was bitten by a patient who transformed in the middle an examination to determine the "mystery illness," she had come down with.

He is a bit small and weak compared to the average Worgen, but nevertheless managed to be a ferocious fighter when escaping the Forsaken assault on his homeland. During the siege, he managed to round up a sizable group of lost and/or orphaned children who had fled from the city, leading them all to safety with the other Gilnean refugees. While he could have stayed in relative safety, after hearing that there were likely more citizens still trapped in the city, instead James went back into the thick of the warzone and searched for as many survivors as he could find. Again, he helped his charges flee behind Gilnean lines. As he returned a third time, he was spotted by Forsaken soldiers, and received a gunshot to the leg before fate turned the tide in his favor. The bite from his infected patient turned him into a Worgen, and with his new fangs and claws, he tore his enemies to shreds. James' rampage continued until he was captured by Gilnean soldiers, shackled, muzzled, and taken away with the other Worgen they hoped to find a cure for.

Regaining his human mind and reaching the safety of Stormwind, James reopened his practice to any who didn't mind that their physician was a large, hairy wolfman. He ended up adopting one of the children he had rescued, a boy named Daniel Welson whom had taken a keen interest in James' profession in the short time they had known each other.