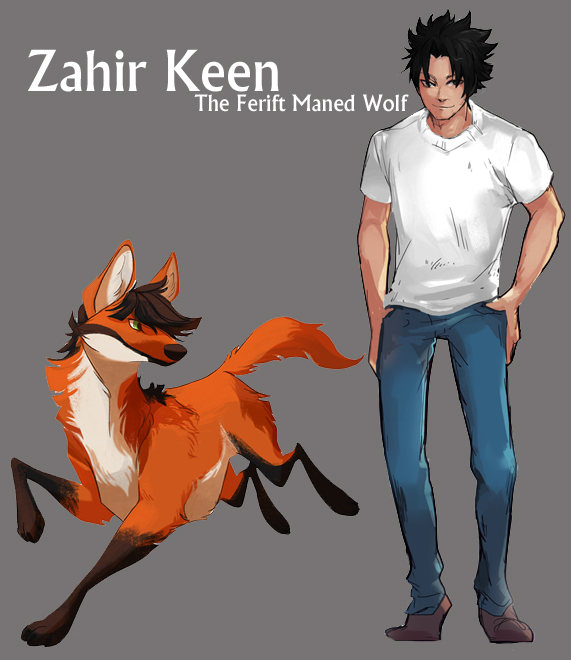 In another world, there exist humans, animals, and the Ferift. The Ferift are animals with the ability shift into a humanoid form. The only difference between a Ferift's human form and a pure human are the eyes. Ferift have a much larger iris and a pupil the shape of their animal form (e.g. a horse ferift would have rectangular eyes).

In this world, humans enslave the Ferift, believing them to be of impure blood. The slaves have many uses, but a popular one is the fighting ring, where humans bet on which Ferift will kill the other first.

One day, a rogue Ferift Wolf by the name of Trinity escaped from the fighting pits and started a resistance to free the Ferift slaves from the humans. Zahir was part of a traveling zoo at the time Trinity freed him. Zahir, having been kept in a tiny cage in his feral form, not allowed to change out of it, was put on display as an exotic exhibit as one of the last of the Maned Wolves left in the world. This caused him to associate much distress with his feral form. After being freed by Trinity, he changed to his human form and never returned to that of the Maned Wolf's.
He has remained in his human for at least 10 years.

As part of the resistance, Zahir is a scribe, keeping track of everything that happens within the group, but mostly dealing with birth rolls. Since he makes a convincing human, he will also sometimes go to the pits to spy for the Ferift resistance.
Zahir is very secretive of his past and his maned wolf form. Outside the founding members of the resistance, none know what his feral form even is or why he avoids it. Secretly, Zahir wishes he were human. One of the few reasons he sticks with the resistance is because he's not sure he could pass as fully human all the time.