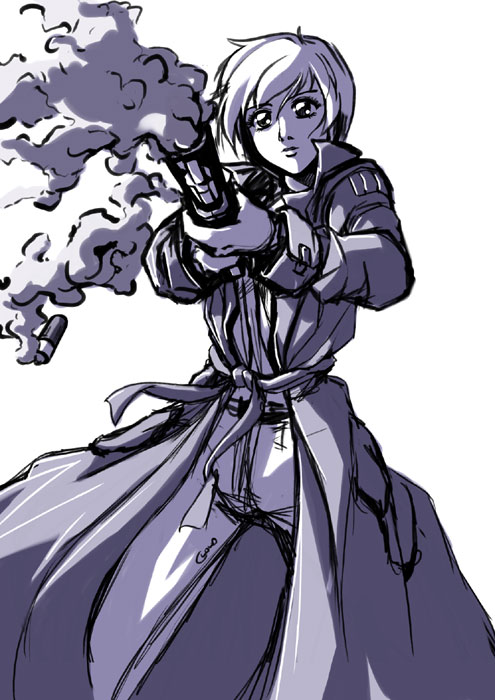 Really old art. Unknown artist.
Esvera is a character from an old abandoned web serial I was writing, ConstantChaotic (CC).

With light blonde hair and dark blue eyes, this twenty five year old Seeker has settled down from her hunt for the Soul Stealer to help teach Edmond Dantes’s fifteen year old adopted son, Q, the basics of guns.
Esvera lives in a bordering country to Monte Cristo, named Cybil. Here, she has brought in Q for a year or two as her student in a favor to Edmond.

In many ways she feels as if Q is her adopted son too, and Q feels close to her as well, often asking questions about life and other sensitive subjects.

Esvera believes that Resonance Souls hold a higher meaning, and places
a great deal of faith in prophecy and fate.

Her own Resonance Soul is called the Tortoise Eye. She has the ability to heal others and construct protective shields and barriers made from ki. She can also see which Resonant a soul is holding based on the usage of their ki.

In chapter seven, Esvera gives Q a book entitled “Resonant Philosophy,” which is the main source of information about Resonance Souls across the world. The book is actually part of a series that is updated every five years.