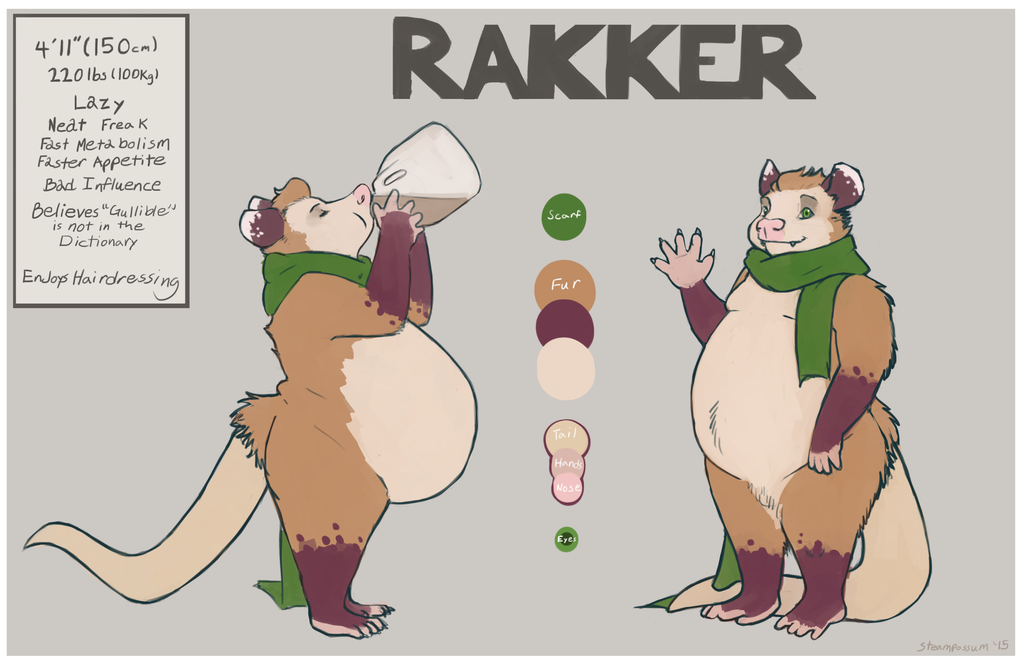 Rakker was intended to be my more obviously energetic and pushy character. Relying on smooth talking and suave words to get his way. Not very competitive he enjoys watching others take him too seriously while he sits back and laughs in the aftermath of everything going his way! Most typically when it comes to food or anything else prone to making you round. He is secretly quite a belly lover (though booty and booby is not off the table) looking for opportunities to; unsuspecting of his intentions, give you a good feel up and squeeze. His short size is especially advantageous for this! Especially when he has gotten you all riled up and challenged~ Passing off at "testing" you or noting on the contrary to fullness! Clearly you mustent be full yet~ You hardly feel taut.

On the flip-side, Rakker is ironically gullible! Easily counter persuaded himself, especially by those smart enough to know his game. His greediness and gluttony doesn't help with this letting his stomach do the talking. He's developed a good bit of a paunch himself in large part due to Zedex's return influence and cleverness.

Some very brief backstory: Rakker is among the same world as my main character Zedex! Is older then Zedex and has known him sense near birth. Rakker served as like a baby sitter for Zed when he was younger, Especially when his mother Teirra was busy. Even when she wasn't busy! Rakker has definitely contributed a fair bit to Zeds already sizable girth. But the same could be said for Rakker from Zed over the years. But he was raised well and with the best of intents! He still does a lot of looking out for Zedex to this day, especially for his waistline.

Today Rakker Focus's on being a hair stylist and barber to which he takes pride in! Something that isn't an attempt to just make you big! He also has a knack for interior design and measurements specific to the individual! Though one could rightly say that this might be largely due to his enjoyment of bigger fellows! Further emphasizing their bigness with larger and bigger living space.

Rakker is thought up and belongs to me!
Artwork was done by the awesome steampossum