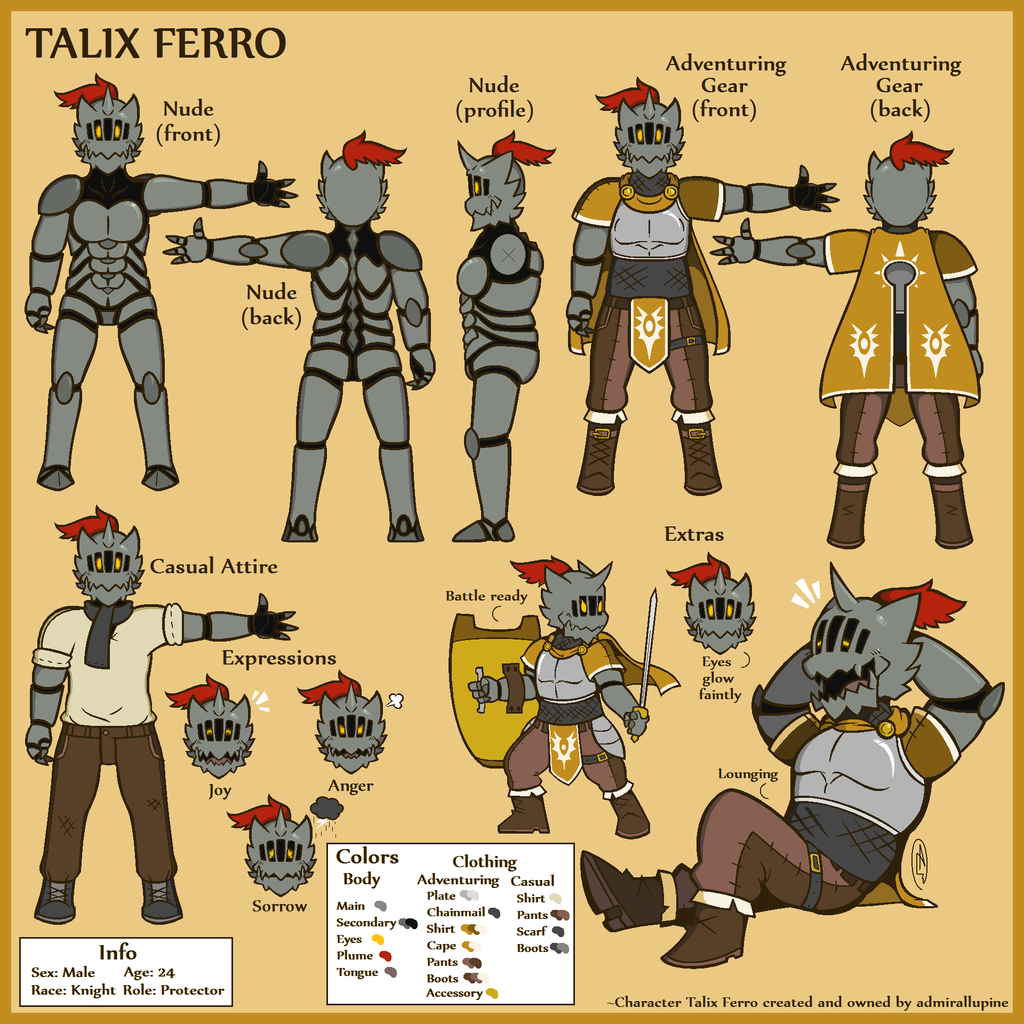 For those of you that don't know, Talix is a race I made up called knights. Physically, they sorta have this exoskeleton thing goin' on and they resemble suits of armor, thus how they got their name. Their most distinct features are their helmet-like heads fancied up with some spikes or horns and a plume. The torso is very defined, resembling that of a well-built human. Out-of-shape knights have their exoskeletons stretched (for the fatties) or shrunken (for the scrawnies) but overall still keep that well-built look, and yes, they do molt. Think of them as bugs, without actually being a bug.
Their exoskeletons usually take muted earthy or metallic colors while their plumes are sometimes a bit more vibrant. Their eyes glow faintly and also come in a variety of brighter colors. Hands come with three digits and a thumb while their feet don't come with any digits, having a very "boot-like" appearance.

Lore-wise, for tabletop roleplay purposes, knights normally live near canyons, mountainous areas, caverns, and deserts and are very in-tune with the element of earth and have a few racial spells unique to them revolving around said element as well as some healing and support. They're hardy, able to resist sickness, poisons, and exhaustion easily, but they aren't very dexterous and usually fumble with delicate work that requires nimble hands. Knights are usually loyal and fearless and can be quick to make allies with if they share a common goal. Regarding classes, Knights are commonly known to be Fighters, Barbarians, Clerics and sometimes Wizards, while other classes are more rarely seen.

Finally, Talix is about 24 years of age with an average lifespan of a knight being about 200 years. He's generally friendly to those he meets and can be a bit of a klutz. His weapon of choice are a wide variety of sword and shield combos, but occasionally likes a powerful two-handed weapon of either an axe or a sword. He likes magic spells but isn't very good at casting them and often times can be seen reading books on magic, he does know a few spells that come naturally from the knight race, but he's a little out of practice with them as well. He can be slightly stubborn when performing difficult tasks, however he knows when to quit if things start to get too out of hand or even dangerous. He loves to have a good drink and meal at a tavern with close friends.

Probably very inaccurate with some physical properties regarding their exoskeletons, but hey, it's just fantasy.

If you have any questions regarding Talix or knights, I could maybe answer them.

Other examples of the knight race: https://www.weasyl.com/submission/1286014/knight-race-male-and-female-examples