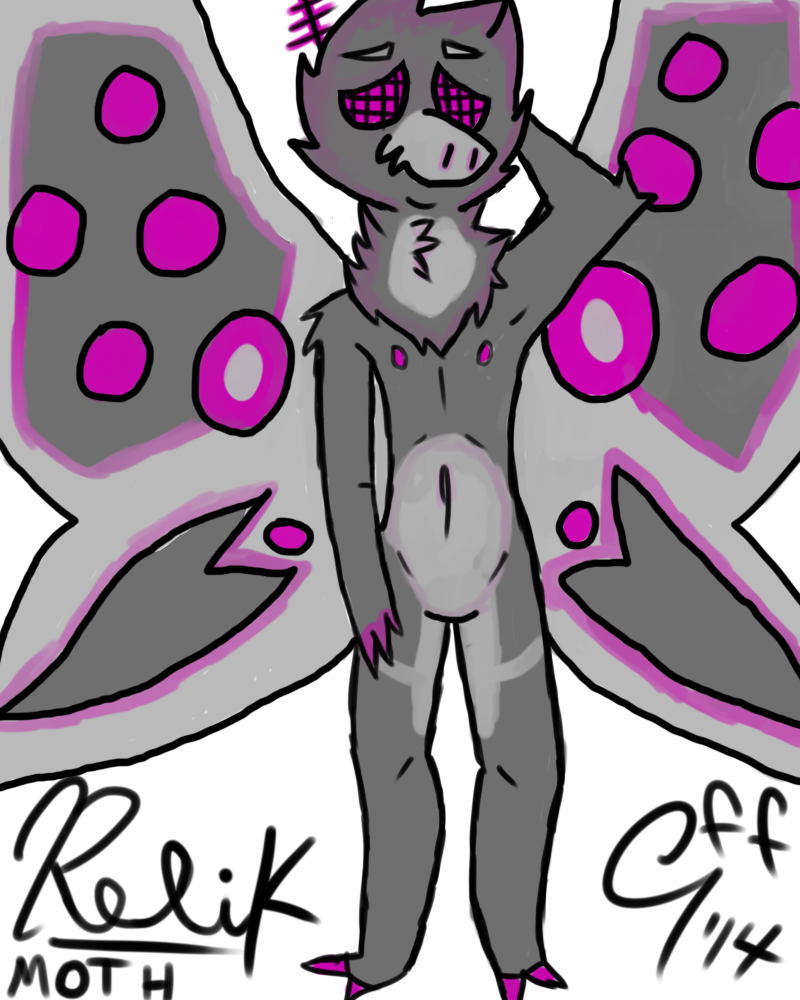 Relik is mysterious. They're very quiet. And shy. They're a purple and gray moth. They almost always don't wear clothes, but they don't have any genitalia so its cool. They're very isolated and would often go to the woods nearby the apartment in a little camp spot they made to just admire the silence. And sometimes trip on mushrooms.

They don't smoke weed. Though they prefer to do dissociatives and psychedelics than anything else. They're favorite drug is Ketamine and second is PCP. They're basically really apathetic and willing to fuck their head up forever. We'll get to why in a moment.

Relik has problems feeling real and Occasionally has solipsistic episodes in the forest when they're alone. They don't want their family, Stubbs, Lucid, and Inert, seeing because they don't want them to worry. But the family knows about it but lets them be. The gang knows they like to be alone, but when they're home, they love and care for them like family.

Relik loves their family to death, though is still unsure what is real and what's not. They feel most real when they're tripping so they trip a lot. They abuse their mind because they figure there's no point in living if there is no purpose to it. So they think their purpose is to die so they can find out what really is real.

[Things they don't want you to know]

• They are constantly questioning what's real.

• Where their spot is in the nearby forest

Relik never met their biological parents. They were found deep in the forest as an infant by a bear nomad named Darl who travelled the country by foot.

Darl heard their cries and ran to see what was going on. He discovered Relik in a circle of small stacked rocks and hesitated to take them because he thought their parents were still around. He yelled out, calling for them, but he was only met with silence.

Once Relik saw Darl, they smiled and instantly stopped crying and reached their tiny arms out to touch him. Darl picked them up and carried them towards the nearest settlement he could find.

Relik would giggle and play with his fur. They didn't cry one bit the whole way.

Darl was rushing to find a settlement at first, but after a few days he started to grow fond of Relik. They would take time to stop at a stream and he would let Relik play with the water. He would give them a bath and play with them. He started to feel like their father. He started to love them.

Darl and Relik traveled about two weeks until reaching a small settlement with wooden shacks, it looked like some sort of tribal camp.

The leader greeted them. Darl was unsure if he should give Relik to them or if he should keep them. He thought about it deeply.

He decided that he should keep them. So he did. And they started walking towards Seattle.

Once in Seattle, Darl decided to settle down with his new child. Relik seemed happy to have found a father. Darl raised them and when Relik turned three years old (three years from when Darl found them), he enrolled them in school.

Relik lived a normal life after that. It was until they got into their teenage years did shit started happening.

Relik was a happy, energetic, kid. They got good grades, had friends, all that. But in high school, they got mixed up with the wrong crowd.

They got pressured into smoking weed for their first time. And when they smoked it, they felt fine. It was until they smoked it more did they start feeling... Unreal. Like everything was a dream. They started feeling depressed because of this.

Their grades started dropping to F's. Their friends started leaving. They felt tired all the time and constantly questioning their existence and what was real.

They slept through class, and stopped talking and did more (negative) thinking.

They eventually stopped smoking and they managed to pass high school with solid D's.

They haven't smoked weed since. They don't necessarily blame weed for anything, but they blame themself for falling into the pressure. It's made them into a completely different person. I guess weed just isn't for everyone.

So they trip on mushrooms, salvia, and other drugs to make them feel real again. Of course it doesn't help, but for a moment, it makes them feel okay.

They met Stubbs at a bookstore in Seattle. They started talking and got along. Relik at this time was 18. They were depressed and looking for a place on their own (preferably somewhere near a forest where they felt most at home). After getting to know each other some more, Stubbs liked them enough and offered them to join it, Lucid, and Inert in their apartment. They agreed. And they've been living together ever since.

Relik still struggles with their dissociative thoughts. They keep quiet because their mind is constantly racing and questioning what is real (and the drugs don't help). But they keep it to themselves.