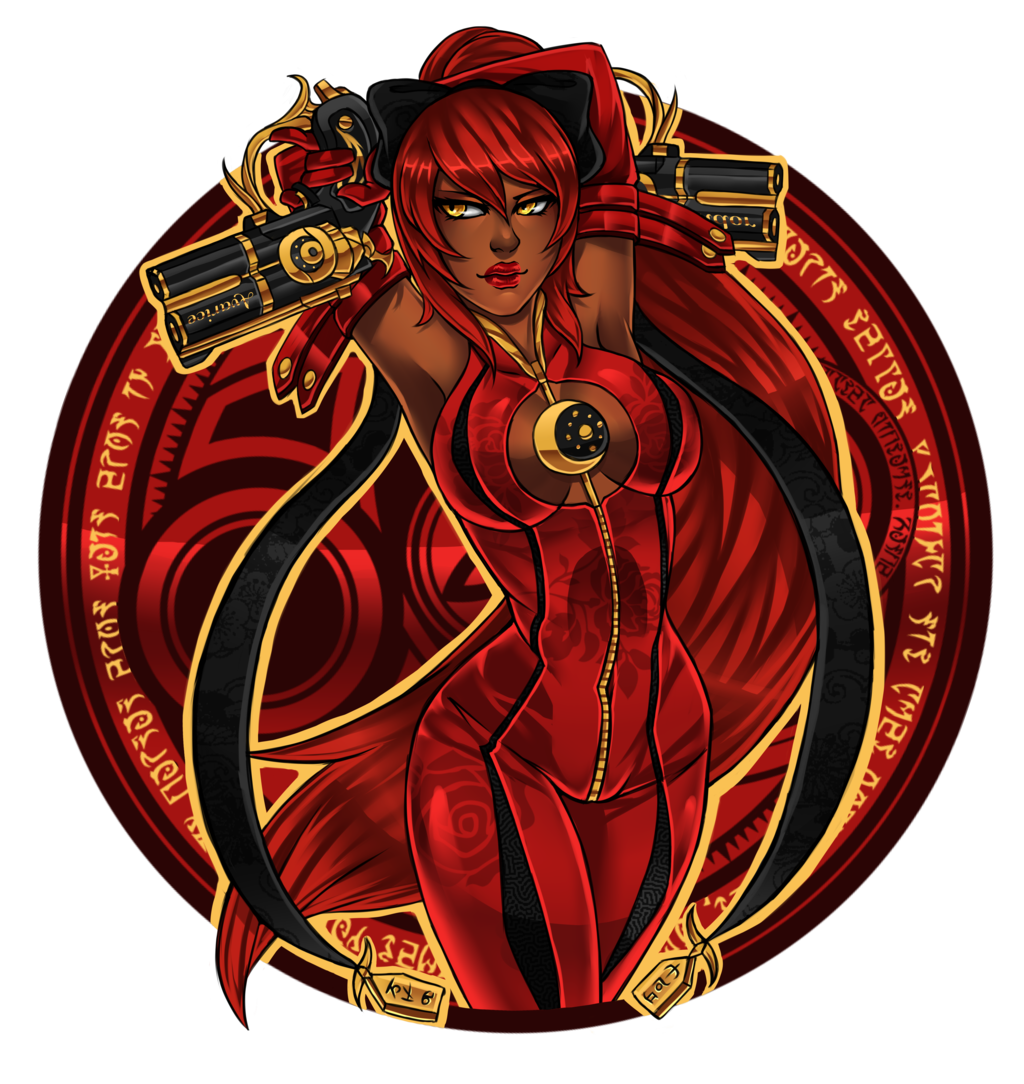 Mandatory for Bayonetta shenanigans. The character herself is in the process of getting reworked - probably the most NSFW chick I have, actually. Feel free to shoot me a note if you want to know more about her.

Name ; Godiva. Though it proves substantial for many, in truth, it is a title.

Hair colour ; Due to her pact, her natural locks have been stained into a crimson plume. Prior to this, they were black.

Eye colour ; Light amber, again, another sign of her pact.

Demonic sponsor ; Vritra (Vṛtra वृत्र “the enveloper”) ; the Asura of drought that wrought devastation upon ancient Gods, and led an armada of spirits known as Krita Yuga. He was said to be so powerful, that none could oppose him. However, he met his end courtesy of the aid of an ancient Sage, and his spirit was cast into the Inferno as punishment for his transgressions. His knowledge of the cosmos and ability to sap the life from all that he comes across, blessed Godiva with several abilities.

Personality ; Proud and fiercely independent, Godiva is a woman that has been moulded through near constant loss and the uprooting of the culture that she was once so proud of. Embittered, yet far from sour, superficially she appears as one that is callous to the unperceptive eye. Digging further reveals a surprisingly insightful, if not receptive personality. Affable, to a degree, she often seeks to uplift the unfortunate by lending them a helping hand by way of gambling.

Playful to a fine point, Godiva seems to live by the belief that one may never know when they may die, and thus seeks to enjoy life to the fullest when she can afford to. Because of this mentality, she often comes off as cheeky or childish to the skeptical, with sharp barbs easily veiled beneath lively jests and vice-versa. The way she carries herself is filled with passion ; never slowing, nor looking back to her past but instead looking towards the future with a bit of a grin. Her apparent ability to seemingly bounce back no matter what happens has led to many discrediting her as immature and petulant, only for them to be surprised by the sharp wit that swims beneath the surface of her facade. Like any Witch of the Umbran Order, she holds a personality that is both sensual and mature, capable of utilizing her femininity as a source of strength instead of a point of objectification.

Flamboyant would be an excellent term to describe her a at heart, she has always been a woman for theatrics, and the world has always proved to be the stage that she acts upon. A conversation may be punctuated with theatrical gestures at any given moment, with graceful, emphasized movements seemingly a part of her character. Multi-faceted, it proves a method of both drawing, and detracting attention from herself. As in the past, her ability to act has had its uses. Easily, she comes off as sociable, for manners and etiquette have dictated her life for as long as she recalls. She has little reason to not be friendly towards faces in the modern era, and though the world may have been harsh, Godiva has never seen it to be a reason to close her heart off entirely from the splendors of the world. All the same, she keeps others at arm’s length- at a distance, due to her distaste for interpersonal relationships.

Years of hiding away, of running, have shaped her to being quite the sharp Witch, for the years weren’t compassionate to her plight, and neither were humans. Both the Clan Wars and the Witch Hunts have left their mark on her, and because of those events, she cherishes her independence above all else. Her hatred of Angels, and all things relating to the Lumen Sages, is near tangible due to this. In the face of the first? She has little qualms with making jeers that border the humiliating, nor does she seem particularly reluctant in utilizing near erotic methods of eradicating them.