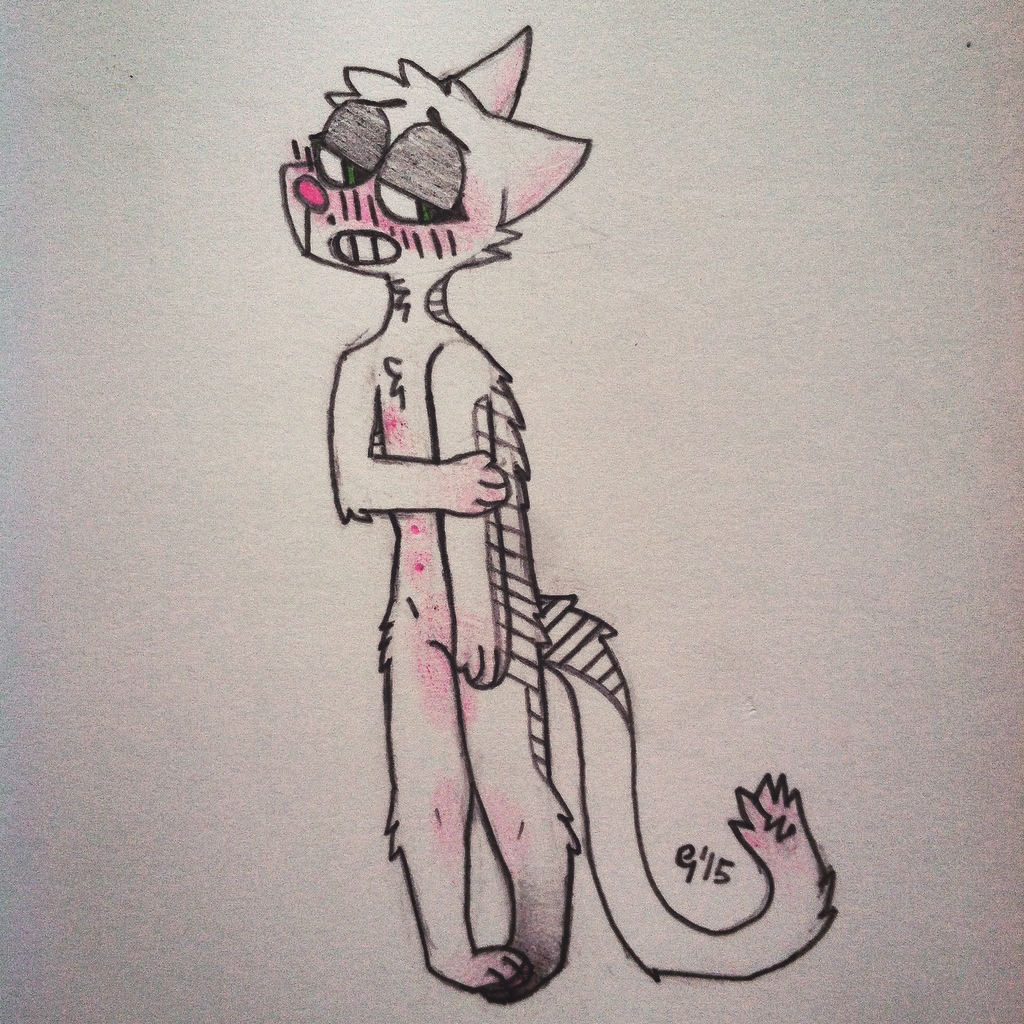 Always on edge
"Nothing is real"
Shakes in public
Head is always down when embarrassed
Collects feathers (reminds him of mom)
Always okay with it
Triggered by satanic things and goat heads
Zones out a lot
Likes women's clothes
Tail's name is Dave
Doesn't listen to music (thinks some songs are talking to him; also hears ringing that he thinks is trying to hypnotize him)

Shakes is a cat with the Voke mutation (a thing I've been working on). He's all white with one black paw, a beauty mark on his left cheek, and scratches on his right cheek from a nervous breakdown he had a while ago. He has light green eyes. Shakes has a mouth on the tip of his tail whose name is Dave. Dave comforts shakes whenever he is panicking or feeling bad. Shakes got his nickname bc when he's in public, he gets paranoid and shakes. But he enjoys photography (though it's of pointless pictures of the ground or a leaf), he likes to sing and is very good at it, and he loves to look cute. He lowkey likes to wear women's clothes and makeup. He's also gay.

Shakes is a pretty chill guy. But he's really ill. Shakes claims to have been born into a cult and was supposed to be sacrificed to satan. People believe this to be a delusion. It's been proved that he was adopted by Ruby and Mike Collin; a loving blue robin mother, and an abusive alcoholic goat father. They lived on a small farm in Alabama.

His best friend was a raven named Calvin who he would go fishing with, though Shakes never learned how to fish, but he enjoyed playing with the worms and gutting the fish.

He has an imaginary friend named Tyler who he talks to sometimes when he's alone and sings to as well (Shakes says Tyler would always recommend ways to improve himself, though sometimes they're dark suggestions. He loved singing to Tyler bc Tyler would always compliment him)

Shakes's mother, Ruby, a blue robin, would always kiss him and hug him. Ruby was so loving to Shakes. She had the softest heart, and always cared for her son more than anything in the world. She would try to buy him things, but his father didn't like that very much. They were both scared of Mike, his goat father. Ruby would always tell Shakes it was okay and shoo him away whenever his father was yelling and getting physical. Shakes didn't have a very good childhood, let's just say that. His whole life has been hard.

Finally, when Shakes was 17, him and his mother escaped to Oregon and lived on the streets. He says it was the best time of his life.

Mike eventually found them after a month and his mother passed, and Mike was imprisoned for life.

So Shakes lived on his own on the streets until his 18th birthday, when he was arrested for attempted suicide. He was put into a hospital and stayed there for three years.

He eventually found proper medication and left the hospital when he was 21. He was doing good, he had a job as a photographer. But when he turned 23, he suddenly stopped taking his meds and started to get ill again.

And a year later is where we are now.