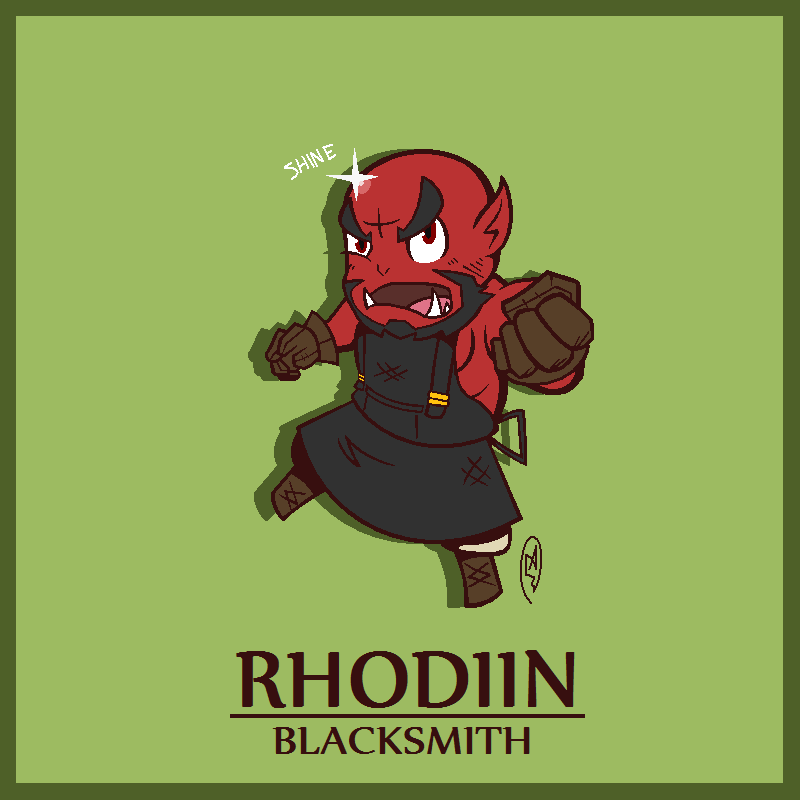 This here is Rhodiin, Talix's fellow blacksmith apprentice, both of which work for a dwarf named Eli in my Pathfinder campaign that I'm running for my friends.
He was a bit of a bully towards Talix during the early sessions and typically resorts to violence to solve his problems and the two often fought. Being the brawler that he is, Rhodiin was usually the victor.

Rhodiin was once taken hostage by a gang of thugs, which Talix bailed him out of. It was later revealed that Rhodiin caught the thugs smuggling stolen goods and chased them down an alley where they finally surrounded him, beat him up and took him to the outskirts of town. Eli informed Talix that Rhoddin was missing and put up a request to find him with a reward. Not too long after, Talix received a ransom letter; they would free Rhodiin in trade for some illegal drugs. Thinking quickly, Talix knew of one person in town he could try, a halfing who owed Talix a favor. At the gang's hideout, Talix gave them his part of the trade, but Rhodiin quickly turned on the bandits once he was freed and Talix was forced into a scuffle. Talix cried out for Rhodiin and the bandits to stop and they would leave once weapons were drawn. The two walked away without saying anything more and headed towards the clinic. The player character, Maleera, went to the clinic upon finding out what had happened. She wasn't too fond of Rhodiin initially, but after hearing him out that he had tried to stop the bandits she realized he had good intentions after all and wasn't just a jerk.

After these events Rhodiin has been much more level-headed.