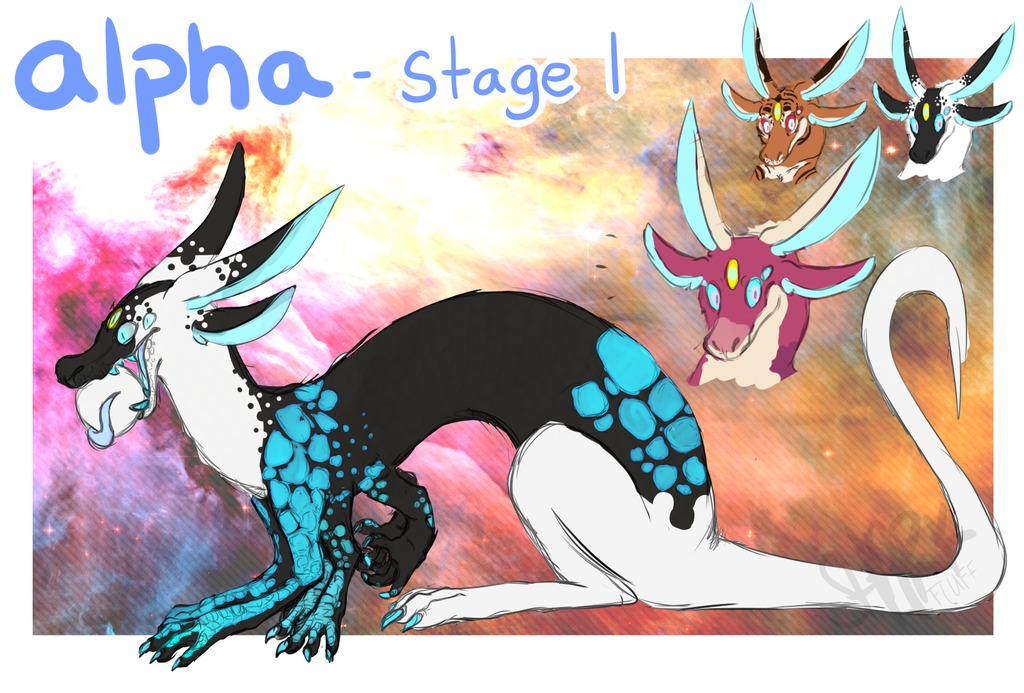 'Alpha' was discovered in the Hunan Chinese province. The creature itself, however, has stated that it 'originates from space'. It has also stated that its species, which has yet to be named, comes from the death of stars, specifically nebulae. It provided no details as to how.

Alpha is an extremely heavy being, weighing a hefty 2,632 pounds (1194 Kg) at 24 feet (7.3 meteres) long. It is unknown where the extra weight originates, even when factoring in the 4 extra limbs it possesses.

Alpha's body is covered in a short peach-fuzz fur that is notably clear, most likely to display the color of it's skin. It's colors and patterns change often, as it copies other animals. This excludes thin membranes and it's scales. These parts are notably a constant vibrant blue, with the only exception being when it is black-and-white. Four of it's eyes are able to change color depending on the animal it copies, though the pupils are never black and almost always a vibrant color. It's center eye always has a yellow sclera and bright blue pupil. The pupils of the eyes do change shape.

It's only visible defense mechanisms seem to be the claws and teeth it possess, and even then, the use of these have yet to be observed. It's other non-lethal defense appears to rest solely in that of it's piercing eyes, as it seems to immobilize aggressors by looking them in the eyes. Aggressors report a feeling of emptiness. It is unknown how this mechanism works.

'Alpha' shows issues with walking, most likely due to it's weight and shorter extra limbs. It manages by tucking it's extra arms as it walks, and even then, it will not move very far on land. It is, however, an excellent swimmer.

'Alpha' itself extremely curious and enjoys studying forest life, in particular. It has a knack for small and large lizards, it's favorite seemingly the Chinese Crocodile Lizard.

It's intelligence has never been measured, but it exhibits intellect of the average 17 year old human.

It also exhibits signs of 'otherworldly' power, at least according to locals of the village in which it stayed. They claimed it to be something of a 'pleasant demon'.