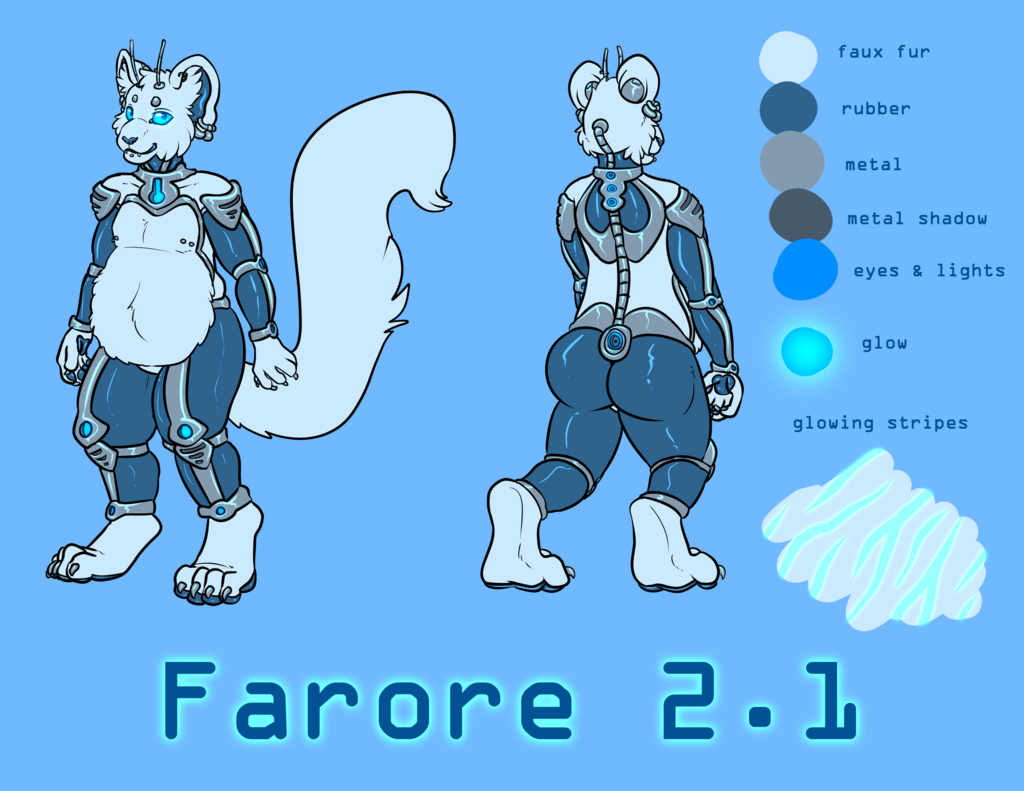 Farore got another update! This one is easier to draw, easier to identify with, and cuter imo. Ikani, CassioBunny, and SpottyJaguar helped with the design.

Internal reference can be found here.

Piercings (may not match current image):

Rubber 'flesh' is a derivative of Plastiflex, a material that deforms when an electrical current passes through it. Touching the rubber while it is in motion may result in a mild shock.

Nanite fluid, the same glowing blue as its eyes and body lights, is goopy and thick. Nanites reside on the fluid for the most part, but swarm over the robot as needed to perform repairs, etc. Nanites are capable of converting any form of matter into any other form of matter, giving them great transformative powers. Farore may direct them consciously to alter the bodies (or perhaps even minds) of others as it sees fit, or they may act on their own. Due to their ability to make use of any form of matter, including gasses such as nitrogen and oxygen, the nanites may give the impression they are creating things out of thin air.

Farore was made by a company called Simulife Robotics. Once laws were passed to allow robots to be counted as people under the law, Simulife made the controversial decision to continue producing robots, but instead of creating them for a definitive purpose, allowing said robots to choose their own purposes and designs. Once produced, robots are given a 'contract' for the price of their manufacture, and have a limited period of time to pay it off. This can be done through a variety of ways, such as the robot getting a job and making payments, having an organic or other robot pay off the contract (which may sometimes be referred to as purchasing the robot; however, the robot is not legally beholden to anyone who pays its contract as it is no longer legal to 'own' robots), taking on a position at the company that produced it, etc. Farore met Cassio, and decided it wanted to be with her, so after some discussion they agreed that she would pay off its contract. However, as mentioned above she does not own it; it is its own person and in fact dominant over her most of the time. It also has a relationship with Hale. It likes to be helpful and prefers to be useful to others as often as it can, but definitely has its own goals and ideas about the world.