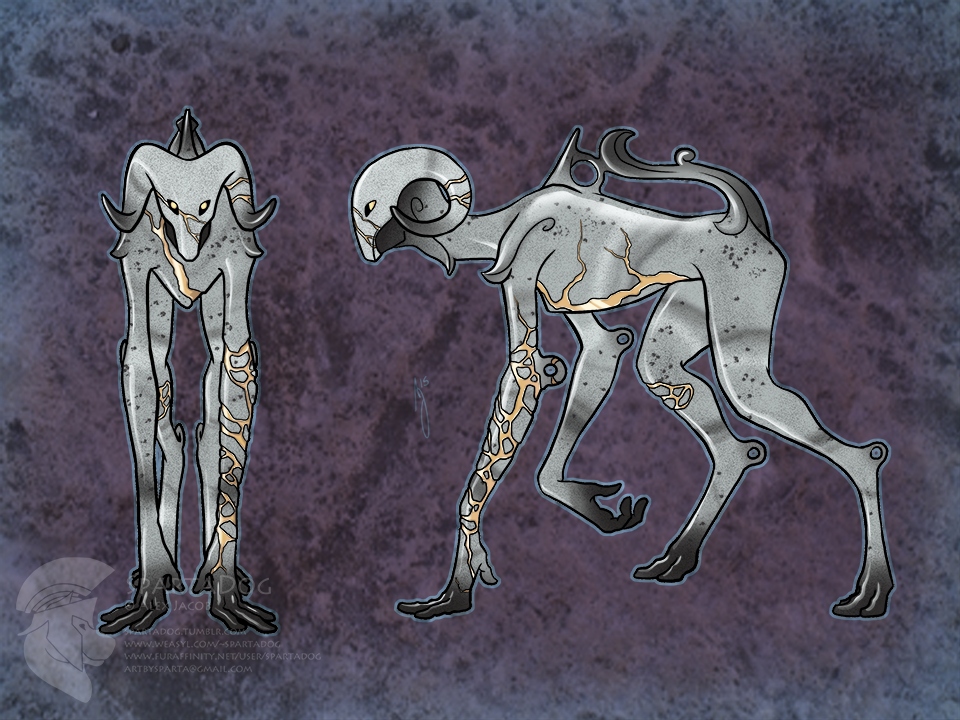 Attention to detail gets you everywhere with me! <3

Perseverance
"Horned One"
Animated Being of The Rage

Perseverance came to being when the ley lines of its planet started to release anomalous energies. The Rage, it became known to be. Nearly all of the creatures of the planet became filled with an insatiable lust for destruction. Not long after The Rage, a significant portion of the population of the world was destroyed. Cities were razed, lands were burned, people and animals killed... Those who did survive this calamity were driven to scavenging and avoiding the remaining 'infected' with The Rage.

Perseverance came to being during the eruption of the ley line energy, along with several other "Horned Ones" called so for the telltale horn-like extensions of their heads. Perseverance came to be near a band of Ragers, unfortunately for it. They saw it and immediately grabbed whatever hard metal objects they could find and beat it. It shattered and broke into pieces. The only thing stopping it from becoming a pile of rubble was a fortuitous strike of lightning. The lightning caused a fire that quickly spread and spooked the Ragers.

It became very fond of fire at that point. The fire protected it. The fire scared away the ones that wanted to hurt it. But it was still broken, and needed to heal. An unaffected human found the broken, shaking, and scared being and knew what to do. It was like the pottery she used to have before things all fell apart. The girl was also a practitioner of kintsugi and had a stockpile of gold, which had lost all value in this desolate world. She figured she might be able to trade it for food or supplies, if she came upon a community of the unaffected who had an abundance, but now... she knew what she had to do.

She found as many pieces of the broken figure she could and dragged it off to a nearby furnace. There, she started to melt a large portion of gold and pour it into the large crack in Perseverance's chest. There was an immediate change with the gold. It became a part of its body. Physically altering the gold, it became more like the creature's blood than true gold, but kept that beautiful luster. A few hours passed and Perseverance's body was restored to whole. When it came to, the girl was gone. Only a blood stain that appeared to trail out of the building was a clue to what might have happened to her...