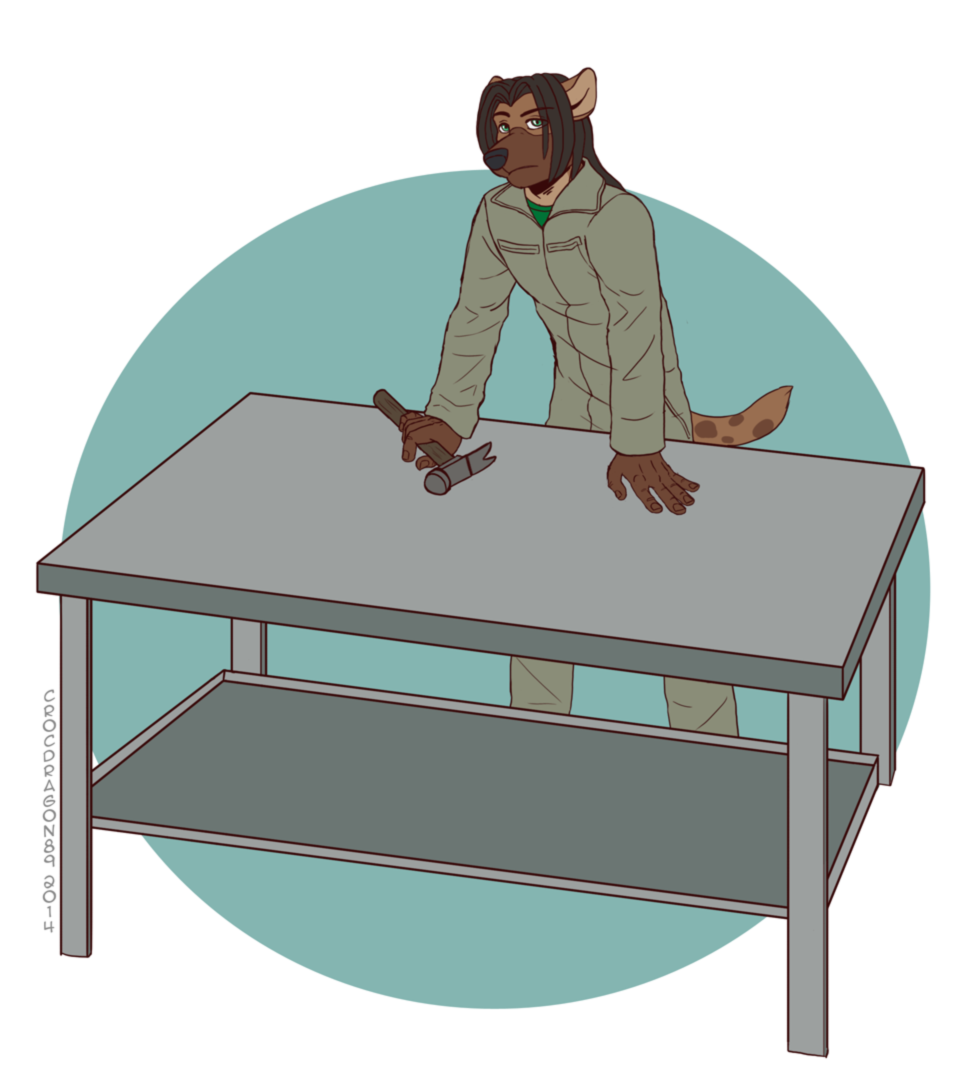 The team underdog; the one you never expect much from, but always manages to surprise you. Brent was one of the three original members of Volcan's heavy metal music band, Winged Fury; he plays the role of drummer for the band, although sometimes doubles up as the team manager alongside Volcan; Brent mostly looks after contracts from deals and concert dates for the band, keeping their schedules and maintaining the instruments, leaving the more in-person tasks to Volcan. He is also the only one of two members of the Os-Nadarra Sentinels who does not possess any sort of supernatural powers -which makes him somewhat contrary to the meaning of the team name, which literally translates to 'Supernatural'.

However, this does not make him any less a member. Although Brent is physically inept and a coward by nature, he's a brilliant inventor, and contributes to the team not only with his gadgets, but also a special combat-efficient hybrid power armour he built himself. He has so far completed three different models of this armour, upgrading and enhancing them as possible -and he denies drawing any inspiration from Iron Man, claiming his idea came from playing the video game, MechWarrior. What does make him seem like a ripoff of Tony Stark, however, is that early in his life, he teams up with Ayane Nagano, a master inventor surpassing even himself, and the two collaborate on a project to design a new, self-sustaining power source, which Brent uses to power his very latest armour, and intends to one day use it to start his own energy company. During the course of this project, he and Ayane fell in love, and are at present a couple, collaborating on many projects.

Brent's first armour, Tetherson Mark 1, was a clunky, slow, and rather clumsy suit, its only weapon being a mounted PKP Pecheneq LMG on the right arm, which although was not prone to jamming, was still capable of doing so, and he was not able to reach the gun with his left hand to correct the jam due to the armour's bulk. However, considering he created it from hydraulic skeleton designs that the I.T.O.U.E used for their cyborgs, the armour was a good start, and with tank-grade armour plating it provided sufficient firepower. The Mark 2 armour, while no less bulky then the Mark 1, had greater articulation and stronger armour plating, protected by Adamantite. Its armaments included a mounted 5mm Minigun, a mortar launcher, a three fingered electro-magnetic claw for snagging fleeing opponents or frying the circuitry of machines, and a flare launcher hidden in his left shoulder. The Mark 3, the crown glory of his work, fixed all of the problems of the previous armours. Powered by his new N.T Reactor in a miniaturized form, obtaining near-perfect articulation in the plating which allowed the wearer greater flexibility, and is equipped with a Disruption Field, capable of stopping energy-based superhumanoid powers that are cast from outside the field's range, and can even block Psionic probing. To top it off, the armour is also designed to be fitted with different weapons Brent can change up between missions, although his best and go-to creation is the Solaris Laser; a laserbeam powered by solar energy that fires pure Ultra Violet radiation into its targets, severely burning them and, depending on the intensity of the beam, causing fatality; this also makes it a great weapon against undead -especially vampires. With all of the features and abilities of this armour; Brent has built himself the means to take on virtually any opponent, making him one of the big guns of the Os-Nadarra.

Brent however, suffers from one severe flaw, besides his over-reliance on the armour; he has a split personality disorder. While Brent, as a regular, is reclusive, easily distracted by his projects and non-confrontational, his 'other' personality, emerging under extreme stress scenarios, is brash, punkish, mildly condescending and extremely perverted -Brent has more often than not awoken from one of his episodes from a slap to the face by a woman that 'Bold Brent' has been hitting on. Even Tsume was once subject to this. Although these occurrences are few and far between, making them of little concern to him or his friends.

Brent appeared in Arc 1 but was not in a key role.

Arc 2: Threat of the I.T.O.U.E
Brent appeared in the battle against the Cyber Wyvern with his Mark 1 armour, and tried to help defeat it, but his weapons were ineffective.

Brent accompanied Vinge in his Mark 1 armour to the Yukon, the greater firepower of the armour giving them an edge against the werewolves thanks to the ammo capacity and firing rates of the LMG. He would also later use this against a Werewolf attack on Dawson, and even battled Assiminik -albeit briefly, until she managed to sabotage his armour and leave him helpless. It is after this attack that Brent completes his Mark 2 armour, which he employed at the Defense of Unity Falls, and fought Assiminik again. Although she managed to sabotage the hydraulics of one of the armour's legs, Brent surprised her with his electric claw, successfully incapacitating her and leaving the Overlords and their Lycan foot soldiers without their strategist.

Brent has not yet made an appearance in this arc.