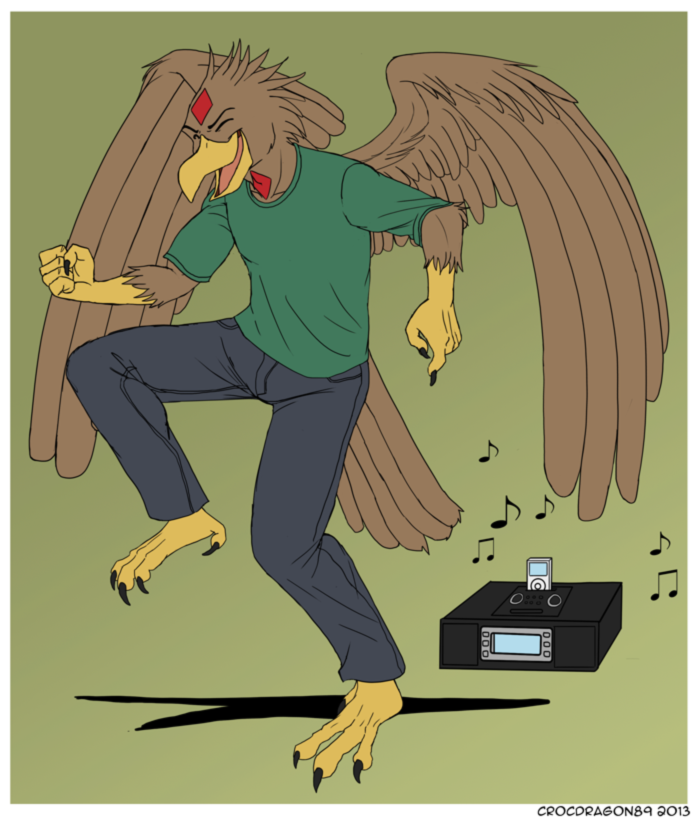 Pavan Stevenson, Volcan's closest friend since they were children, is a hyperactive little bird. He hates standing still at any time for any amount of time, always wanting to be on the go; anyone who tells him to 'slow down' are often met with his catchphrase 'Gotta be on the move to keep my groove!'. Also loves to crack jokes and puns, sometimes at the strangest times. He loves music -being quite a good guitar player himself, he is one of the original three who formed the Metal band, Winged Fury, alongside Volcan and Brent, and coupled with his love of music is a love of dancing.

Despite his free-spirited demeanor, Pavan is a valuable member of the Os-Nadarra, not only because he's one of the six who originally formed the team or for being their only Wind-user, but he's also the fastest of the group. As a Wind Elemental Pavan has the ability to manipulate the wind and air around him, creating vacuums and gales to trip up his opponents, wind tunnels around himself to fly or even run faster -having clocked a top flight speed of 414kmph, and even create small tornadoes around himself for his seemingly awkward yet deceptively effective fighting style, using rotating motions to add momentum and force to his strikes, and dual-wields a whip and khanda that compliment his fighting style perfectly. Some think he's being silly, but in truth he's actually using an ancient fighting style employed by the Rajput warriors of India, making up for his lack of strength with the rotational strikes. This also makes him difficult to read as since his attacks involve full rotations, some cannot see his sword coming until it's too close to block.

Pavan was born to a Meteorologist named Richard Stevenson, who began as a Geologist studying the landscape of India, where he met a beautiful Indian woman that he soon fell in love with; Pavan does not actually know his mother personally, only that she was not able to stay with them after his birth, due to her seeing Richard having been done without the approval of her father, and he refused to accept Pavan into the family. Despite this, Pavan honors his heritage by dying his feathers with the red diamond symbol -a long-standing family tradition. Refurbishing the diamond markings are on of the few things he'll stand still for.

Pavan worked with Volcan during the Gang War as a scout and chaser, able to catch even the fastest cars of the street crews, including Blair Harrison who he chased through the city, taking out the tires of his car and allowing Volcan to defeat Blair in a bare-knuckled brawl, where they took him to the police and he was left in their custody.

Pavan dated Tsume briefly in this chapter, having a crush on her since they had met. However, she did not share his feelings; although admitting she liked him, she said she was the wrong girl for him, as someone like Pavan would need someone who could keep up with him. Pavan accepted this with a grain of salt; disappointed but not heartbroken, he carried on.

He helped the crew stage the ambush at Vernardo's airstrip, where he helped Rikyuu and the others take out the crews from behind, ensuring their capture and even taking down one of the Cyborgs himself. But when the Cyber Wyvern arrived, his powers were of little use in an offensive manner until Vinge came up with a plan to bring down the Wyvern. Letting Rikyuu copy his powers and combining the two together, they created a powerful whirlwind around the wyvern that dragged it down to the ground, allowing Vinge and Volcan to finish it off.

Pavan's first battle in this Arc was his attempt to protect Volcan from Kumori while the phoenix was incapacitated. Although he succeeded in preventing Kumori from killing Volcan, he lacked the combat experience to defeat him.

Pavan joined Vinge in the Yukon when they sought the source of the disappearances hitting the region, and it was here his role as a scout truly blossomed, able to cover more ground faster than anyone else in the group, and when Vinge created the ice wall around Dawson City, Pavan's wind powers effectively controlled the perimeter and forced the lycans to retain a frontal attack that ultimately led to the team's victory.

Pavan was the first one to respond to Obsidian's call for aid when she located the Naga, Rovdyr, and with her Psionic powers protecting him from that of Rovdyr's, the Wind Phoenix squared off with the predatory Naga all on his own and successfully defeated him, forcing the Naga to flee for his very life when the other Phoenixes arrived.

Pavan also attempted to fight Calhoun alongside Tsume when the city was attacked by the Overlords, but Calhoun's powers literally ate through Pavan's wind and defeated him soundly.

Arc 4: The sons of Kleetra

Pavan helped Volcan, Tsume and Buniq in the first encounter with Korban and Kieran, and when the two escaped, Pavan pursued Korban, attempting to stop him from escaping the police, but after being shot in the leg with an ice bullet, Pavan's leg was encased in ice, causing him to hit the street hard and suffer serious injuries, which allowed Korban to make his escape. Pavan was left out of commission for several weeks.

(Stories are still under development)