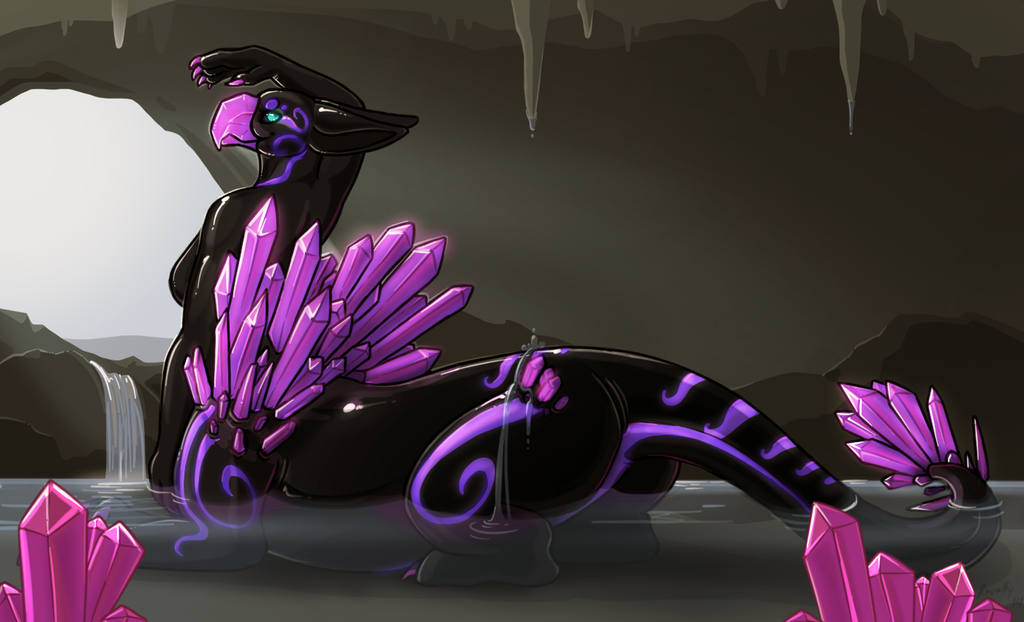 Appearance: Her body is made of up of an amorphous material, which changes in consistency from a soft, pliable material (similar to a slick water balloon) to being hard and crystal-like in nature, with hard edges and no curves. As such, she is able to shift her form and texture at will, but as her host was a gryphon, she tends to have gryphonic traits here and there. Her body is black, with glowing blue-purple highlights running over her body. These highlights reflect her mood; when she is calm they're made up of gentle curves, and when agitated they become sharp, zig-zagging across her body.

Any hard surfaces, such as his beak and claws, are hard and crystalline in nature, colored a warmer/redder blue-purple color compared to her body's highlights. This also includes any underlying bone structure she's imitating as well (for example, if one were to press in on her sides they could feel ribs). She also tends to take on a somewhat curvy figure, as it's very easy for her to mimic a more feminine figure since her body tends to be soft and rounded when not hardened.

Her eyes softly glow cyan, as well as her tongue, nostrils, and gender(s).

Personality: Noctua's personality can be summed up in one word: curious. With a natural flair for science, a body that doesn't seem to age, Noctua has become incredibly intelligent over time, and easily on par with other intelligent species. Noctua is a big fan of Chemistry, as she can use her body, which is non-reactive to most things, to form 90% of the containers and tools she'd require to hold and mix various chemicals. Her curiosity and odd sense of morality tends to clash with others though, as what she considers harmless could very well be lethal to someone else.

Of course being a parasite, Noctua also sometimes wonders if she actually has a soul or not. Being a creature that's directly born from the destruction of another, that question tends to weigh on her fairly heavily.

Other information: She is able to maintain control of her body at distances of up to roughly one yard with no contact with any other portion of her body. It is impossible to move any portion of her body past this limit, as it resists in a very similar way to a magnet strongly attracted to something being tugged away.

It's also worth noting that the material that makes up her body is a superconductor. That is, she can manipulate the way her body interacts with magnetic fields. In practice, this allows her to have smaller parts of herself be able to hover and propell themselves through the air (as long as they stay within range of her control), but she'd still need proper wings to move the bulk of her weight through the air.