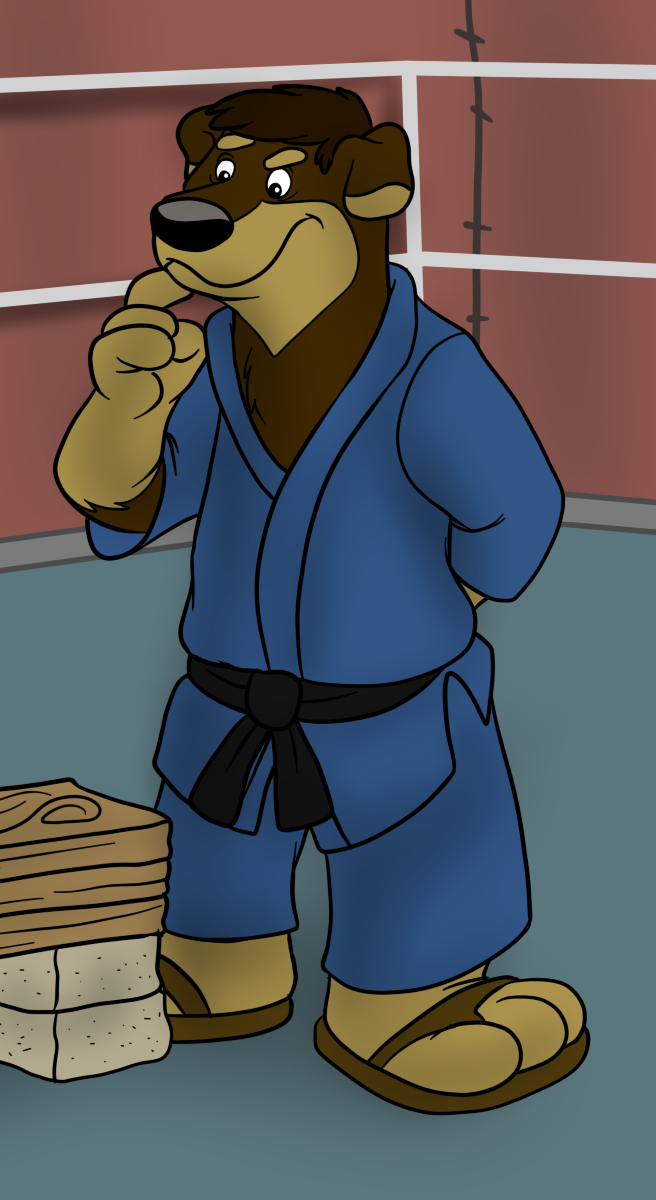 Roger is the only child of Marcus Eugine Hamilton and Felicia Marie Phillips. He was born and raised in Colorado Springs, Colorado.

As a pup, Roger spent a lot of time doodling in a sketchbook. He never thought much of his doodles, but kept doing it anyway, as it served as a means to pass time, as he made very few friends in his childhood; ironically enough because most made fun of his drawings. He would usually ignore the teasing though, as he felt content drawing since it let his imagination grow. His mother would, for many years, feed his hobby as she wanted to support him as best they could. Roger's interest in art meant he got better and better at it. He had gone from simple little drawings at around age ten or so, to drawing much more complex and detailed images at around age fifteen.

Around that time, Roger also began to take an interest in karate which he picked up from watching movies as well as from being inspired when his father, who saw the movies he'd been watching, showed him a photo album and his old belts. This led to his family getting him enrolled in classes, with Roger wanting to follow in his dad's footsteps and make him proud. Roger continued with the karate classes for several years, until he became a black belt. Coinciding with his karate, Roger took several art classes in college to further improve those skills as well.

At age 21, Roger decided to start a dojo centered within an airforce base near his home, in order to teach servicemen and their spouses. The pupils he had were all adults up until one day, a year later, when a mother, concerned about her son's lack of interaction with people, approached him to teach her eleven year old son, Birch. Roger was unprepared with this because he knew it would mean teaching in a slightly different way than he was accustomed to. The mother persisted, so Roger consented, and the young bear cub, Birch, was brought in.

Roger's hesitance to teach the boy quickly faded as he saw just how hard the cub trained and how focused he was. This made Roger quite happy, but it also led to Roger making a huge mistake. Roger became so enamoured by the young cub that he asked him to start attending 'private' lessons. This private lessons, though, would turn out not to be about karate, but, instead, more about Roger's growing physical and sexual attraction to Birch. It wasn't long after that, that Roger had engaged in sexual interaction with the cub in secret during their time together.

When he was released, he was parolled for several years, which, in itself, made finding a job next to impossible, because he was forced to explain himself at every interview, and few people wouild give him a second glace once they heard what he had done. It took nearly a year before he was able to find a job that would accept him, finally becoming a carnival worker amongst a bunch of other furs who, much like him, were criticized for their past. Roger spent approximately 12 years with the carnie circuit, keeping to himself whenever he could since he found that any attempts to talk with the others that he worked with made him feel even worse about himself than he already had for giving in to his sexual desires. During that time, the only thing Roger could do to stay sane was to resort to his old pasttime of drawing, which he did whenever he was not performing; breaking boards and showing karate stances and moves for the amusement of others. His old pleasure in drawing the images, though, was almost completely gone. Most of what Roger produced were images not of happy times, but of images depicting pain or sadness, which were a reflection of the pain Roger felt inside himself over what he'd done over a decade ago.

One day, however, a concert was being held in the fairgrounds that Roger had been working with at the time. The concert, as Roger would discover, was headed by his old karate student, Birch Draper, who had, since, become an accomplished musician and songwriter, with a music group called The Beach Bears. When Birch happened across Roger's tent one day, Roger felt a sense of fear and nerves welling up inside him. In attempt to assure himself that he was actually seeing his old pupil, Roger invited Birch onto the stage during the audience participation portion of his act, and was both shocked and further frightened to discover that he was, in fact, standing next to his old student.

That meeting prompted Roger to seek out Birch once his act was over, and, though the meeting did not go well at first, Birch and Roger began talking again, with Roger recalling the events of the last fourteen years, and showing the many bruises and scrapes he had on him leftover from the abuse he suffered during fights with people that discovered what he'd done. Birch invited Roger to sit in on the concert that was being held that night, giving Roger a brand new sketchbook to draw in during the show, having seen that Roger was still drawing just as well as he always had, even if they weren't the same happy images.

Following that day, thanks to encouragement from not only Birch, but from Birch's bandmates, Stargazer and Dipper, Roger eventually left the carnie circuit entirely, and got help to get his artwork shown in more public venues. Roger, to this day, is still drawing, with a special bit of inspiration from his "star pupil" Birch.