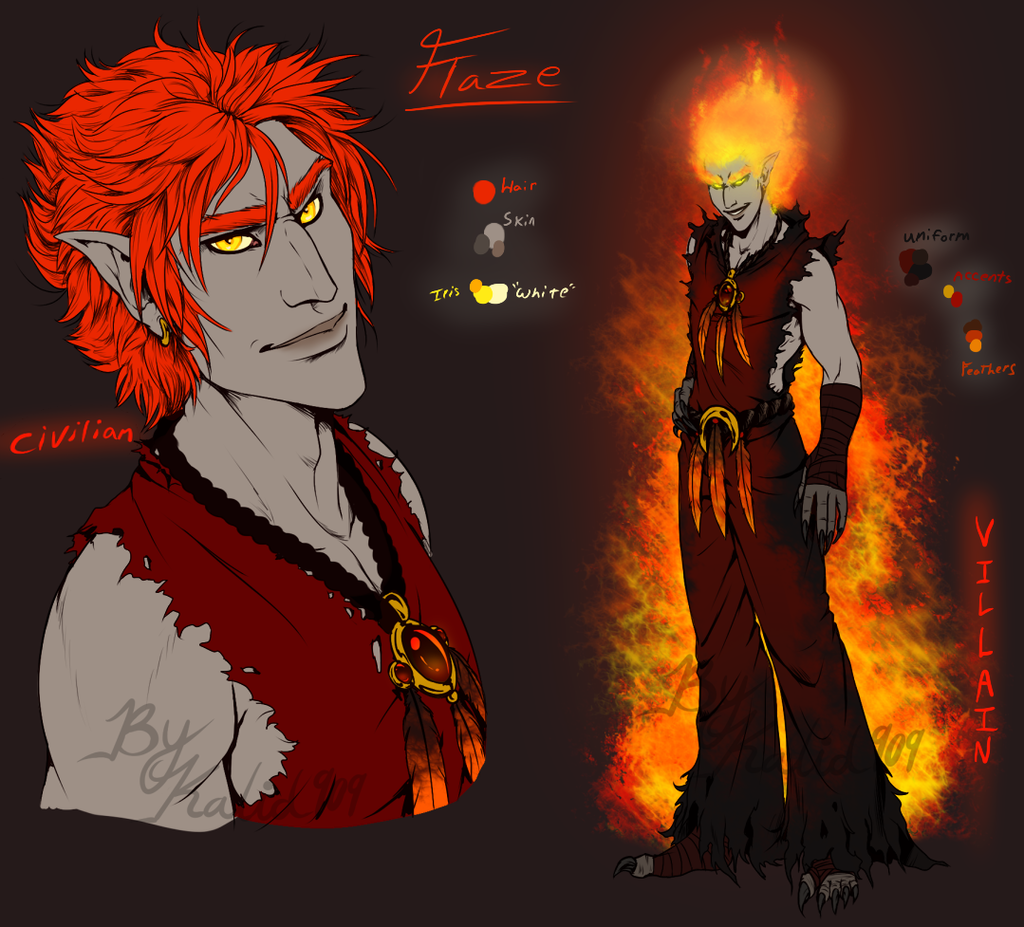 (This is his alternate version for the SGPA roleplay group on DeviantART.)

(Copy+Paste from DA)
BASIC STATS
Alias: Flaze
Group / Alliance Affiliation(s): None, currently. Not object to having one, though.

Secret ID: Markus Morgan, Real name unpronounceable by the human tongue. (And his, at the moment)
Nickname(s): Markus, Flaze (No preference)
Age: 19 (Ages very slowly. Will probably be physically 20 in about 100 years.)
Gender: Male
Nationality: Unknown (Phoenix)
Places Lived: ???, Gotham City
Current Residence: Gotham City
Height: 6'2"
Weight: 187 lbs
Eye Color: Bright amber
Hair Color: Almost florescent red.
Hair Type: Shaggy, layered, and feathered. Sticks up all over the place, and just does whatever it wants.
Skin Colour: A grayed/ashen dark tan.
Physical Description: Flaze's wardrobe changes on a regular basis, but generally it's worn, ragged, and in the hues of black, red, brown, and orange. He prefers darker shades, and avoids wearing garish clothes if at all possible. He seemed particularly drawn to the punk fashion, and can be seen with spiked wrist bands, chains, etc. More often than not, he has a smirk or smile drawn across his long, hawk-like features, with a thick, low brow hooding his vibrant eyes. With pointed ears, slitted pupils, and thick nails coming to sharp points, it's easy to guess that even in his Civilian form, he's not human.

When he really wants to blend in, Flaze will wear a hooded jacket or vest with hands in his pockets, hood drawn low. It's not flawless, but it gets the job done on an average day. He'll try to get away with not wearing shoes any chance he gets.

When his power is "awakened", or more plainly, he becomes violent or focuses on the shift, he takes on an altered appearance. His hair, brows, and even lashes turn to flame, his eyes glow yellow, and his hands and feet gain a leathery, avian texture with curved eagle's talons. The amulet around his neck glows more vividly, and a flame is seen churning inside it's core.

Personality
Alignment: Neutral, border-lining on chaotic. He has his own vague code of ethics, which tends to regularly conflict with both good and evil stereotypes. Over all, he's well intentioned, though he isn't hesitant to break the law ant take a life if he thinks there's a good enough reason. Reason varies on his temper.

General Personality: Rough, playful, sarcastic and social, Flaze is either fun to be around, or down right grating... Having rather acquired social skills, he's certainly not the fellow everyone loves to get along with, but he has his graces. Generally quite frank and honest, he isn't shy about telling most people what he thinks, and is extremely devoted to anyone willing to accept him, flaws included.

Quirks: Restless, he often shifts around on his feet or will occupy himself with fire tricks. Doesn't think things through, so half the time his ideas can be weird, or just down right stupid and dangerous. Likes burning things...Anything, matches to books to signs to people, if it's flammable he may consider torching it in the back of his mind. Capable of mimicking some bird sounds, if he doesn't think about it.
Hopes: To find one or more person(s) who will be able to put up with him and accept him as he is. Uncovering his memories. Unlocking his Phoenix Form. Having a place to call home(Condemned buildings aren't cutting it for him).
Fears: Being Alone. Being rejected by a loved one. Discovering his past(Part of him is afraid of what he'll find). Losing a loved one. Losing his temper on a loved one. Water... Very much hydrophobic, keep your bath tubs and pools away from him...

Relationships
Mother: N/A
Father: N/A
Brothers: N/A
He has no recollection of his family, aside from the fact he once had one. He has a strong feeling he will never find them again, however...

Closest Friends: None
Enemies: Several law-abiding groups, but no specific person or hero.
Girlfriend(s): A certain flame-wielder's caught his eye...~

Battle
Power(s): Flame Manipulation and creation.
As a living phoenix, Flaze is capable of bending flames to his will as if they were part of himself, so long as they are within 20 feet of him.
General summary; he is able to both create fire using his own core, as well as warping any nearby sources to his desire. He is at his peak in the midst of his element, such as a burning building. However, depending on the willpower of an enemy fire-wielder, his ability to wrench control from their grasp is quickly decreased, and with an equal, it's anyone's guess what will happen in a power struggle. (flip a coin to see who wins? XD)

Body Of Fire: He lights himself up like a roman candle, as the saying goes. He ignites his entire person in flame for a limited time, serving to temporarily resist water (By turning it to evaporating it before it can touch him) and making himself very difficult to touch or come near. This is a highly exhausting skill to try and maintain, and is usually only used in bursts of a few seconds. To burn hot enough to stop water from reaching him takes double the effort.

Flame Strike: He sets his hands and feet ablaze, depending on which he's trying to strike with, to add a bigger impact and percentage of damage to his blows. It's a much lesser, more isolated form of 'Body of Fire', and is low cost. The more power he pushes into his limbs, the faster his energy will drain.

Ignition: Lighting things within a 20 foot radius on fire. Including people. The further they are, the more difficult, 20 feet being a strain, and anything outside of that being extremely strenuous. Flaze usually only uses this on flammable substances, or something that's already burning, to cut down on cost, but will use it on other things as well. This is a medium cost skill, as long as he only ignites the object/person, and isn't trying to maintain the flame from being put out. To maintain it is the same cost as 'Body of Fire', and will take large chunks of energy out of him quite quickly. Hence he favors flammable objects that will burn easily all on their own.

Minor Abilities: Immune to fire. He is incapable of being harmed by any natural form of heat. He however is strongly weak to water.
Martial Arts. He doesn't know where he learned them from, but he has a muddied, hybrid style of Hung Gar, Snake, and dirty street fighting.

Weapon(s): None. (Unarmed. Claws only)
Style: Fast and very aggressive, lacking defense.
Strengths: He comes in quick, and hard. Flaze seeks to overwhelm and 'out-damage' his adversaries, taking them off-guard in a whirlwind of violence and potentially flame. He's hard to out-maneuver, and tends to make up for what he lacks in technique, by empowering his strikes with fire and claws.
Weaknesses: Low defense and intelligence compared to many, his recklessness leaves many openings to be taken advantage of. With such a short fuse, if one can withstand the blows, they can rile him up to get him to spend his energy much faster, and burn out quickly. Also, the more angry, the more openings he leaves in favor of aggression.

Background: Born a phoenix, Flaze has never been reborn, being quite young for his species. He remembers very little of his past, but hopes to gradually uncover it, find out how to access his true form, and all the powers that come with it.
(To be developed and discovered through roleplay :D )

His earliest memories that are clear, are of him wandering into Gotham City 6 months ago, lost and confused. Everything familiar, yet alien, knowing things, and yet not knowing how... He couldn't remember how he understood the words humans spoke, but he did, or the fact he recognized they and himself were different creatures. A city like this was never kind to the wanderer that was unaware of it's dangers, or even it's own denizens, marking Flaze to any would-be brigand that wanted the large jewel around his neck.

The attack by a group of thugs startled and terrified him, which in turn became rage. It wasn't long before he has set not only his attackers on fire, but the local area as well, flames quickly spreading from one desolate building in downtown to the next. This drew the attention of local police, who intervened. With shouts and aimed weapons to try and convince the phoenix to stand down, Flaze took it as another attack. Easy to say, by the time it was over and he had fled, the whole police department was his enemy.

Presently, he lives in abandoned buildings, and sticks to crime-filled areas where the police are underpaid, corrupt, and stretched too thin. Flaze steals what he needs, and has no qualms about destroying anyone who takes violent action against him that is human. His only experience with the world's heroes was one ice-caster who caused him to flee in fear of his life. Currently, he does his best to keep under the radar, and avoid detection while he tries to eek out a living and figure out what to do with his directionless life.

However, a temper like his isn't likely to be able to stay hidden for very long, and is bound to draw plenty of attention, eventually...

Villainous Motivations: Apart from his less-than-moral tendencies leaning him towards unlawful methods to survive, his first encounters with humans had left him less-than favorable towards them. He finds the general populace worth less than himself, and so their lives are of low value, unless he knows them personally. Flaze sees no foul in stealing what he needs from those he sees as having plenty to share, nor anything wrong with defending himself to alarming extremes, such as killing someone who was drunk and hit him with a beer bottle. This attitude put him on the bad side of the law fast, and getting a job with his appearance and rash temper was out of the question.

He is a villain both out of circumstance, and necessity, and has come to see the idea of human "justice" as a charming delusion that is impossible to realize in the "real world". In his mind, only extreme measures will ever make a lasting impression...

Interestingly, this hasn't lead him to become a crazed vigilante or wanting to destroy the human race. He just hurts/kills whoever crosses his path that seems like 'scum' in his eyes, or makes him mad enough.

Roleplay:
I grealy prefer to RP over skype, PG 13, but willing to go R in terms of violence because I'm like that. XD I'm a social drama romantic, but love a good dose of action and horror/mystery, otherwise it gets stagnant and boring. :)

My activity is very poor, and I'm no good with names unles I've talked to you a LOT. If you're okay with this, and don't mind RPs being infrequent and all over the place, I'll be happy to write with you! 0v0 Just note me asking for my skype, and please don't feel bad if I need you to remind me who you and your character are. ^^;

My memory is extremely bad, I'm working on getting it looked in to. :D