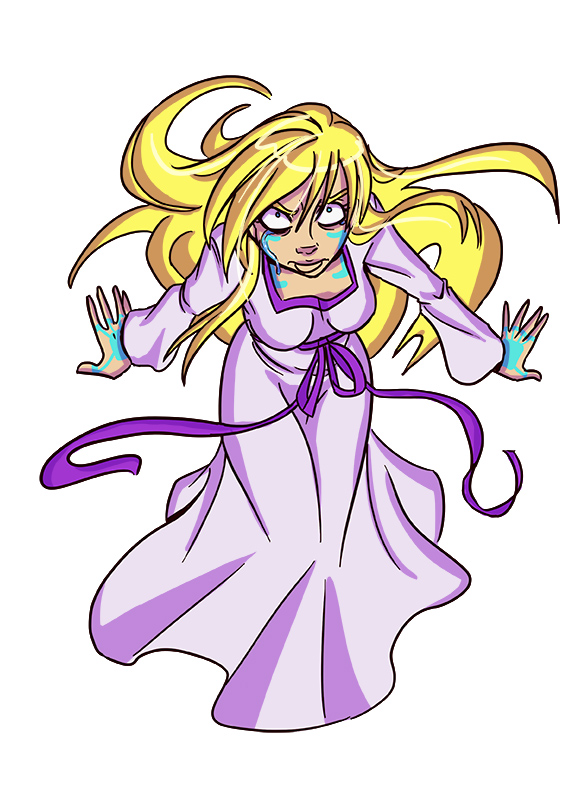 Gray, whose first name is Charlotte but she doesn't remember that/refuses to accept it, believes that she is dead and a ghost, a spirit cursed to wander the earth for eternity. She is not. She is alive. When her psychic powers began to manifest, she saw a specialist and agreed to a procedure that was supposed to develop her powers. She believes she died during the operation but she did not. The experiment was very much a success.
Gray is a depressing sort of girl, pessimistic and gloomy, a little naive to the intentions of others and a bit slow to grasp things. She is desperately lonely but expects everyone she meets to reject or betray her as, in her mind at least, they all have already. Since she believes shes dead and nothing matters, she can be a little self centered, but not bratty.
Her psychic powers allow her to turn invisible and incorporeal. Matter goes right through her causing no damage in this state. She has telekinesis, and has a habit of throwing things at opponents, or opponents into things. She also frequently throws a plasma blast that appears as a ball of blue light she can fire in a straight line.
She does not have telepathy, but is highly susceptible to it. She is also extremely weak to magic. She can float but not fly, sometimes she emits a soft blue glow, and she isn't very fast.
She has a habit of hanging around the cemetery, but can also be found in alleys, abandoned buildings, churches, and high school seances.