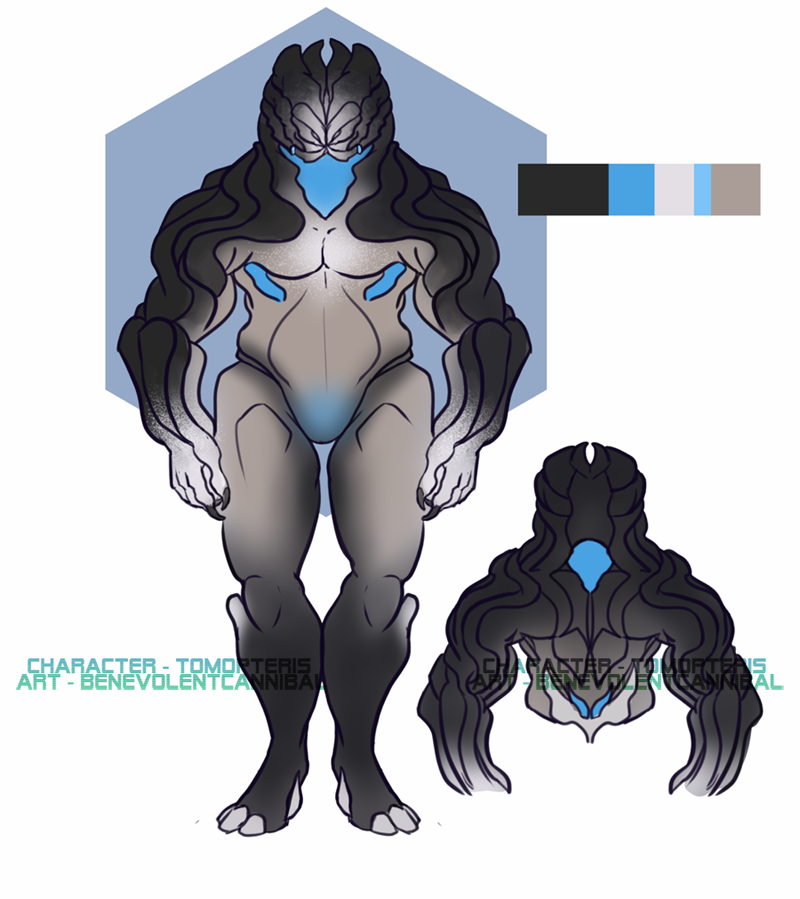 Rhojek is a brute. He is incredibly strong, incredibly durable, and (surprisingly) incredibly fast. As such, he makes for a formidable hunter and can provide a substantial challenge to even some of the most capable of creatures in the universe. He acts as hired muscle--whether that means protecting a wealthy client for a period of time as a glorified body guard, or taking out targets quickly and efficiently. He doesn't necessarily enjoy killing, but he is unphased by it and sees it as a simple way of life.

Believe it or not, the Bindolé are not carnivorous. They do not even eat. They are a unique race that draws all necessary energy from the sun, and retrieve the remainder of their required minerals from water (which they drink gallons of a day). It is not uncommon to happen upon a dozen Bindolé sprawled out for cat-naps under the sun. They retrieve energy through the blue membranes on their bodies, resembling the squishy body of a jellyfish, but feeling more like solid silicone. They speak through a process of vibration patterns that can sometimes sound like humming, which can be translated into speech using certain sophisticated devices.

While the Bindolé themselves are not sophisticated enough to travel into space, their planet has been colonized in certain areas by superior intellects and established trade stations. This allows them to hitch a ride, so to speak, on foreign crafts. Rhojek initially only worked as a guard in one of the trade cities, but eventually his work led him off-planet.

Personality wise, Rhojek is a stoic figure. He rarely speaks (or in his case, vibrates), and is far more keen to sit on the periphery and observe. He is all about business: if he is hired he will not fail his client, even if that means risking his own safety. He would never stoop as low as to accept bribes or tolerate manipulation, and is far more intelligent than he looks. At the same end, he doesn't like to over think things. If he is interested in an individual he will make that very clear to them. If he is not interested he has no qualms over hurting feelings or bruising ego. He's a warrior by nature, though, and any individual that manages to dominate and/or defeat him in a skirmish will likely gain his respect, possibly even his affection.