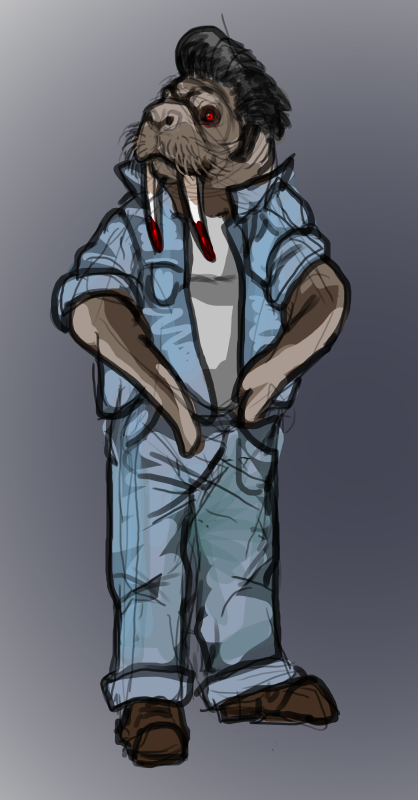 Iliaster is a strange case. Once an ordinary walrus, living a walrus life, cutting breathing holes in ice and eating tubeworms, she offended the god of the sea with a blasphemy so obscene, it has been stricken from history and no one has attempted it since. Cursed out of the ocean and onto land, forced to totter around on the most awkward and ungainly legs imaginable, Iliaster went into hiding for several years. Then, somehow, in a manner too terrible to ever record, she managed to offend one of the deities of the land and was cursed AGAIN, this time to shun the sunlight and drink blood for sustenance.

These days Iliaster keeps a low profile, at least as much as that's possible when you're a seven-foot-tall bipedal walrus. Keeping herself fed is no problem: it's shocking what people stumbling out of a certain type of club at three a.m. can fail to notice. At some point in the past 50 years, Iliaster got the idea that "greaser" was the coolest possible personal style, and once a walrus gets an idea about fashion, it's nigh impossible to change her mind.

Brought to you courtesy of this fursona generator, which is everything I ever wanted from the internet. The prompt was:

vampire walrus.
it has human legs.
it dresses like a greaser.

I may continue playing with this for a while.